Commemorative Courtyard and Roll of Honour

As you enter the Australian War Memorial, passing between two medieval stone lions that once stood at the gateway of the Menin road at Ypres, now Ieper, your eyes will be immediately drawn to the copper clad dome of the Hall of Memory wherein lies the Tomb of Australia’s Unknown Soldier.

Should you wish to start your visit to the Memorial by visiting the Hall of Memory, which I recommend you do, you should walk straight ahead through the Commemorative Courtyard by the Pool of Reflections and the Eternal Flame.

In addition to listing the names of military campaigns Australia has been involved in – Gallipoli, Flanders, Papua New Guinea, Java, Timor and so on – the walls of the courtyard host 26 sandstone sculptures, representing the people and animals inhabiting Australia. Everything you see including the plants, the water and the flame is aimed at evoking a mood of calm contemplation.

Running along both sides of the courtyard and evident through arched cloisters is the Memorial’s Roll of Honour. Accessed from the upper level, the Roll of Honour lists, inscribed on bronze plates, the names of every Australian (Armed Services) who has died in war since 1885 – over 102,000 souls.

As you make your way around the galleries within the War Memorial the personal stories behind some of the dead are narrated but the majority are not and the individually inscribed names you see here on the Roll of Honour are included when you see references to dozens, hundreds and thousands killed here and there around the world in defence of the freedoms all Australians, and thankfully many other nations, enjoy today.

The Roll of Honour is searchable online at https://www.awm.gov.au/people/roll-search/roll_of_honour/ and I am sure volunteers and staff at the Memorial would assist anyone wishing to find the name of someone known to them. 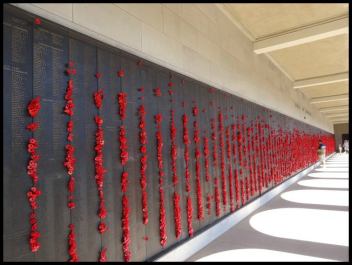 Walking up and down the two sides of the Roll of Honour certainly brought home to me the magnitude of sacrifices made and lead me to wonder how many were made in vain.

Many of the poppies you see inserted in niches beside names on the Roll are placed there by family members, comrades and friends of the deceased. Many others are placed, beside names completely unknown to them, by tourists and other visitors moved by their visit to the War Memorial. If, having visited the Memorial you feel so moved, small poppies can be bought in the gift shop.

In a alcove at the opposite end of the Commemorative Courtyard from the Hall of Memory, above where you first entered the Memorial, is a commemorative roll recording the names of Australians who have died in various wars and conflicts and who were other than members of the Australian Defence Forces. In this commemorative roll (book) are listed Australians who died as members of other allied forces, the Merchant Navy, the Australian Red Cross, the YMCA, as war correspondents, as photographers, as artists and in other callings.