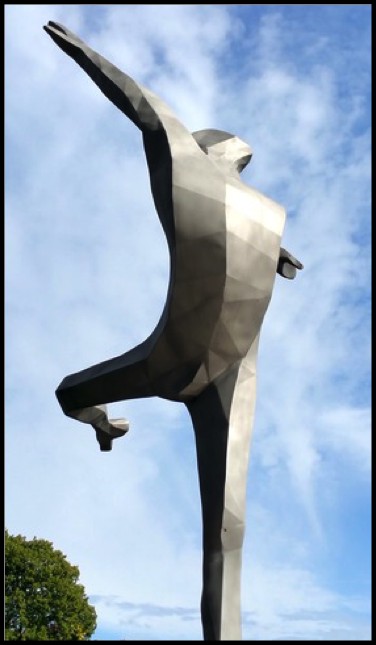 Moving across from the Freedom Monument towards the Latvian National Opera I was attracted by this graceful brushed aluminium figure by the canal. It is a very modern and eye-catching sculpture of Maris-Rudolf Eduardovich Liepa, a Latvian ballet dancer whom I had never heard of. The fact that I had never heard of him is hardly surprising given that my last (and indeed first) visit to the ballet was, to my shame, over 30 years ago – a magnificent performance of Swan Lake by the Kirov (Mariinsky) Ballet company in the then Leningrad (now St Petersburg).

Maris Liepa was born in Riga on 27 July 1936 and died in Moscow on 25 March 1989. His major claim to fame is that he performed with the famous Bolshoi Ballet, based in Moscow, for over 20 years.

Prior to his time with the Bolshoi, Liepa studied in Riga and performed with the Riga Ballet at the Latvian National Opera from 1955 to 1956.

During his extensive career, Liepa danced leading roles in Swan Lake, Sleeping Beauty, Don Quixote, Romeo and Juliet and Giselle, and his portrayal of the Roman tyrant Crassus in a 1968 production of Aram Khachaturian’s Spartacus, won him the coveted Lenin Prize in 1970.

While most famous for his ballet roles, Liepa also appeared on television and film, wrote a number of books on dance and directed the Bulgarian National Ballet.

The monument by Estonian sculptors Jaans Tomiks and Jiri Ojaver was donated to the people of Riga by Latvian philanthropists Boris and Inara Teterev in 2013, as part of the 150th anniversary of the building of the nearby Latvian National Opera.

My final photo, of Maris Liepa in action is courtesy of – http://www.liepa.ru/about/maris-liepa/