While it is not the largest monument in Riga (the Soviet Victory Monument takes that honour, by a long shot), the modernist Freedom Monument, dominating the view as you head east along Brivibas iela from the Old City, is certainly the peoples’ favourite.

The monument, by Latvian sculptor Kārlis Zāle, was unveiled on 18 November, 1935 to honour the soldiers killed in the Latvian War of Independence from 1918 to 1920. 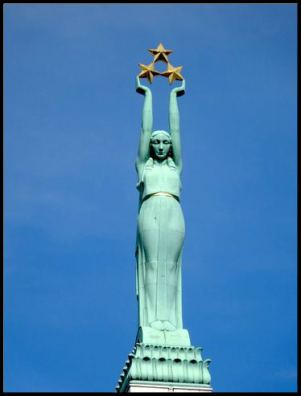 Not by chance was the monument located where a bronze equestrian statue of the Russian Emperor Peter the Great stood from 1910 until the outbreak of World War I.

The monument quickly became an important symbol of Latvia’s freedom and independence after over 200 years of Russian occupation and subjugation though, when constructed, few realised that that freedom and independence would abruptly end on 17 June 1940 when the Soviet Union occupied the country, only to be ousted by Nazi Germany on 1 July 1941. The Soviet Union re-occupied the country in October 1944 and remained an uninvited guest until 1991.

The monument stands some 42 metres high. Its red granite pedestal, inscribed with the words ‘For Fatherland and Freedom’, bears 13 groups of sculptures and bas-reliefs depicting Latvian heroes, history and culture. The stylised copper figure (affectionately known as Milda, after a Baltic goddess of love, courtship, friendship and freedom) on top of the slender column represents liberty while the three gilded stars she holds aloft symbolise the then three districts of Latvia: Vidzeme, Latgale and Kurzeme.

During the 1944 -1991 Soviet occupation of Latvia plans were, reportedly, made to demolish the monument. Thankfully, these never came to fruition. Rather the Soviets ascribed new symbolism to the monument, not unlike the way Latvians would later ascribe new symbolism to the Latvian Riflemen Monument, just off Town Hall Square. So it was that the figure on top of the monument became Mother Russia and the stars stood for the newly created Baltic Soviet Republics of Latvia, Estonia and Lithuania.

Not surprisingly, when cracks began appearing in the Soviet Union in the 1980s, the monument became a rallying point for Latvian patriotism. It was here that the first pro-independence demonstrations were held, and flowers laid, in June 1987 to commemorate the victims of Soviet deportations.

Talking of laying floral tributes, on 8 November 2001 an ethnic Russian schoolgirl from Daugavpils ‘laid’ a floral tribute of a different kind here when she swatted Prince Charles (heir to the British throne) in the face with a carnation. Ms Lebedeva, who was protesting against Britain’s participation in the war in Afghanistan, was charged with ‘endangering the life and health of a foreign dignitary’ but was later found guilty of the much lesser offence of hooliganism. The BBC later reported that Buckingham Palace officials stated that His Royal Highness had been unaffected by the assault.

Weather permitting, a two-man Honour Guard stands at Freedom Monument daily from 10 am to 4 pm.