All Saints Church was not my list of things to do in Riga for the simple reasons that it is not mentioned in mainstream tourist literature and I had not come across it during my online research.

I came across it by chance, and only because I noticed its very distinctive green copper domes, while wandering around in the Moscow District.

This beautiful red brick Latvian Orthodox church was consecrated in 1891 (replacing an earlier Byzantine style wooden building). The church, like many others, lost its bells and suffered damage, through looting, during WWI though it quickly recovered from this. It again came upon difficult times during the post WWII period when Latvia formed part of the former Soviet Union though this church, unlike most others, appears to have operated to some degree during Soviet times. 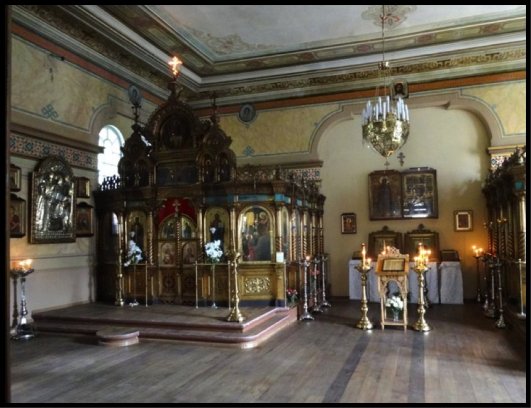 In 2004, the great dome of the church was completely replaced and other refurbishment was carried out.

At the time we visited, the church was undergoing a major internal refurbishment. While normally this would preclude a visitor from getting a good look around it actually worked to our benefit in this instance – in the sense that while the church’s precious icons had been either removed or covered in plastic we were not only allowed in but were also permitted to take photographs, something generally strictly prohibited in Orthodox churches.

While refurbishment was underway, the main part of the church was boarded off and only a small area just inside the main door was open for worship and general viewing. Having closely viewed and enjoyed what was available in this area, and taken a few photographs (pictures 2-4) a lady approached us and beckoned us outside. Were we being evicted?

The lady spoke no English but as we were finished our viewing we followed her outside. She then beckoned us to come down the side of the church by a small but interesting old graveyard, predating this and the former church, to a side door. Were we being brought to a superior being for admonishment?

We were neither being evicted nor admonished. The lady, obviously a church official or parishioner, had observed our keen interest in the church and had now lead us into the main part of the church, under the central dome, which was essentially a building site. Having pointed at some of the stunning artwork/fresocs within this area, which had almost totally been restored, and indicting, through her actions, that photos could be taken she left us to enjoy the artwork, which we most certainly did.

I thoroughly I recommend you make a short detour off the Moscow District ‘tourist trail’ to admire this beautiful church. Do check if photography is permitted once the main icons have been uncovered/reinstated and the church is fully open again, as it may not be.

Not readily available though I believe it is open every day.

On foot if you are exploring the Moscow District or via No 15 trolleybus – Katoļu iela stop (also, bus No 18 same stop).