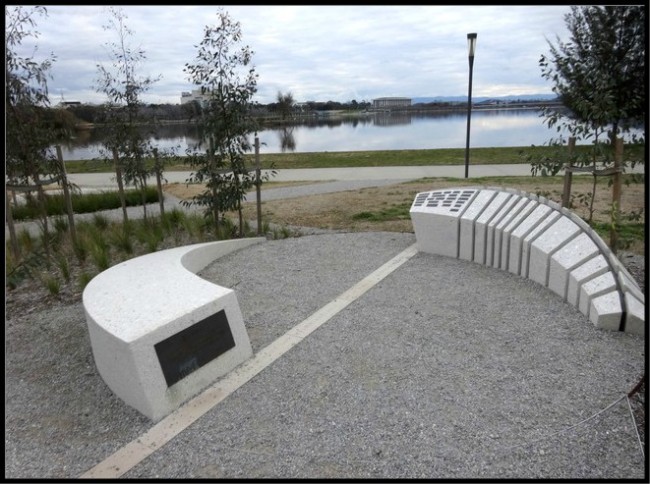 On 26 December, 2004 (Boxing Day) a 9.1 magnitude earthquake off the tip of Indonesia’s Aceh province unleashed a most extraordinary and devastating tsunami which soon hit the beaches of 14 countries around the Indian Ocean on its westerly path. Fortuitously the tsunami, one of the most horrific natural disasters in recorded history, did not hit Australia – one of the closest land masses to the earthquake’s epicentre.

Within days 230,000 lives were lost. Millions more people were displaced.

Among the lives lost were 26 Australians who found themselves in the path of the Tusnami, 23 in Thailand and 3 in Sri Lanka. A further nine Australian defence force personnel were killed in a helicopter crash on the Indonesian island of Nias during humanitarian efforts in the catastrophe’s aftermath.

This understated memorial on the northern shore of Lake Burley Griffin, dedicated by Malcolm Turnbull, the Australian Prime Minister, on 3 December 2015, is a memorial to the Australian dead but in looking at it I could not but remember the total number lost in this tragic event. I would imagine that no-one else, including the families of Australia’s dead who where the inspiration behind this memorial, could do otherwise.

Looking towards the lake (pictures 1 and 2 attached), on the right hand side of the memorial, designed by Darryl Cowie, are 26 separate pillars representing the 26 Australians who lost their lives in the tsunami. One of the larger pillars lists the names of the victims. On the left hand side is a seat of reflection for those visiting the memorial.

For my next CANBERRA – PARLIAMENTARY TRIANGLE NORTH OF THE LAKE  review click HERE.
For other Canberra reviews click HERE.