World-wide, Freemasonry has always been and remains shrouded in mystique. How can this be for an organisation some 300+ years old (with roots back to trade organisations in the 1400s) with a current membership of around six million? Are Freemasons latter day Knights Templar? What do the handshakes mean? Why the regalia and other symbolism?  Do they really run the United States and other countries?

I am not going to suggest that a visit to the amazing Freemasonry museum in Sydney will answer, to your satisfaction, any of these questions or countless other questions that you may have about the Freemasons.

What I can say is that here you will find a fantastic collection of all things Freemason, see a number of the mason’s rather plush meeting rooms which, like the society itself, are steeped in symbolism and gain a general insight into this most intriguing and talked about institution.

Here you will be able to learn about the history of the Freemasons, learn about their role in, and contribution to society – in business, in charity, in war etc – down the ages, and today. The well laid out museum has a surprisingly large collection of memorabilia, artefacts and regalia, including a wonderful selection of old aprons which particularly interested me. The, now ceremonial, aprons remind members of the Freemason’s roots as stone masons and represent the rather more rustic aprons worn by these tradesmen. The differing designs, colours and motifs thereon signify different lodges and the rank, within the Freemasons, of the member.

Another thing which I found interesting here were the tracing boards. In Freemasonry there are three basic steps in the initiation process of new members, the three Masonic Degrees (Entered Apprentice, Fellow Craft, and Master Mason) through which the aspiring member must pass before becoming a fully fledged Freemason. The three tracing boards, or teaching aids, one covering each degree, are pictorial representations of the concepts novice masons must learn and commit too as they make their way to full membership. While the basic features of tracing boards are consistent they come in all shapes, styles and sizes and the museum has a number of sets on display, including one dating back to 1837. Two sets of tracing boards – hung top to bottom depicting degree one to three – can be seen on the right of the picture below. 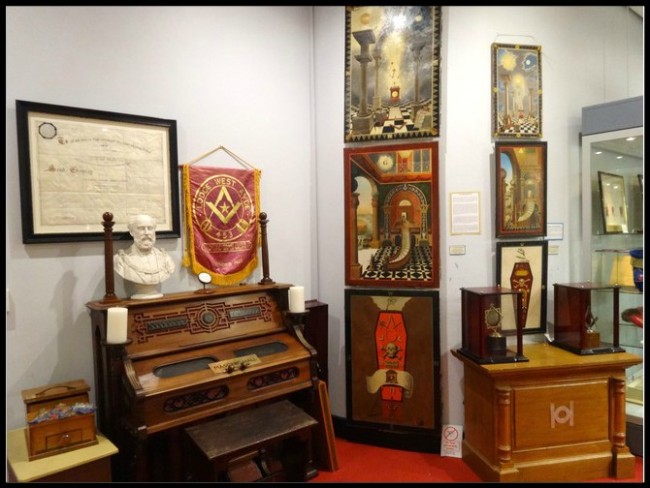 Before someone pulls me up and refers to 33rd Degree Freemasons – this is a stage in the Scottish Rite of Freemasonry and while different branches of Freemasonry have differing degrees and rites there are three fundamental degrees, as I have referred to. Additional degrees, if offered, are optional extras and lateral as opposed to upward movements, if you like – the 33rd ‘degree’ being an honorary accolade of the Scottish Rite.

While there is a massive amount of things on display, lots of explanatory texts (sometimes vague) and guides to answer questions, I could not help feeling that a lot is left unsaid relating to the Masonic symbolism behind much of what is on display.

As such, stay as long as you like, ask as much as you like, you will not leave here with a full appreciation or understanding of this mysterious and at least semi-secret society. You will however have a great insight into Freemasons, their history and masonic heritage, some of the society’s symbolism, and what Freemasons stand for today. 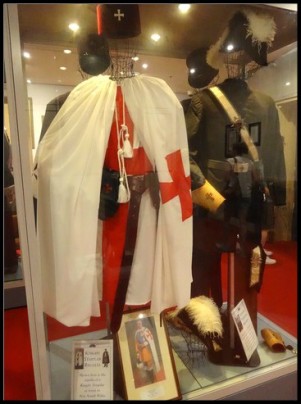 Going back to my early mention of the Knights Templar, an organisation that greatly interests me, I am not a subscriber to the view that the Freemasons are latter day Knights Templar. Though there may be similarities and links, and that austere order is part of the Masonic heritage – as evidenced by the Knights Templar regalia displayed in the museum (picture along side) – the Knights Templar were a Christian based society while the Freemasons ascribe to being interdenominational (though this varies from lodge to lodge and some – at least at some level – require members to be of the Christian faith) even though its rituals and symbolism are firmly grounded in the Old Testament of the Christian Bible.

Ah, the intrigue. Do visit the museum and work it out for yourself . Also try and understand why such luminaries as George Washington, Benjamin Franklin, Rudyard Kipling, Mozart, Winston Churchill and Homer Simpson became Freemasons.

What you will see depends on how/when you visit. Free public access gives you access to the main museum (very worthy in its own right) while joining a paid tour will, in addition to giving you a commentary, get you access to areas of building not open to the unguided visitor. I actually visited on an open day (part of an annual Sydney Open (day) – see separate review on that) when all the lodge meeting rooms and the Grand Masters suite were open for viewing, in addition to the museum.

Monday to Friday, 8:30 am to 4:30 pm – dependent on the availability of voluntary staff. I suggest you ring ahead if you want to be guaranteed access.

Guided tours (approx. 1 hour) are available at 11am and 2pm Monday to Friday – BY APPOINTMENT ONLY. Cost of tour $10 with a minimum of 4 persons.

A free audio app for the museum can be downloaded – see website for details.

The Lodge has an extensive library and archives which can be accessed by those interested in research between 10am and 3pm Monday to Friday.

2 thoughts on “Museum of Freemasonry”