Located about 7 kms outside the village of Kiltycougher, Co. Leitrim, in the townland of Carraclooona, en route (indirect) from Bundoran to Enniskillen, I passed a small, very missable, sign advising of the presence of Prince Connell’s Grave. I pulled up, reversed back the necessary 100 metres or so and set out, on foot, about 50 metres across a peat bog to investigate.

What, to the uninitiated looks just like a pile of stones, is what remains of a rectangular, as opposed to circular, megalithic court tomb dating from the early Bronze Age (2000 – 1500 BC).

This tomb is particularly significant as it is one of the only megalithic tombs in Ireland that has retained its entrance stone which, to boot, features a kennel hole stone door not normally found on tombs in Ireland.

While the purpose of the kennel hole is uncertain theories suggest it was there to allow subsequent burials or let people deliver offerings to the dead. The theory I like best is that it allowed people to speak with, and listen to, the dead. This being Ireland, and given the love of the Irish for a good chat, surely this is why this particular kennel hole is here?

So Dear Reader, if you care at all, you might now be wondering who this Prince Connell (also spelled O’Connall) was. I likewise wondered.

Alas, like with lots of things in Ireland, the truth may have been lost in the mists of time though the moniker, Prince Connell’s Grave, has been handed down orally through the centuries. To be sure, there have been various Gaelic chieftans from the O’Connall lineage and the most likely contender as owner of this tomb is the original Connall, King Connall Gulban, who gave his name to the province of Tír Chonaill (now Co. Donegal and neigbouring Co. Leitrim).

The only problem with this theory is that there is another grave, about an hours drive from this one, in which King Connall Gulban is also said to have been buried. 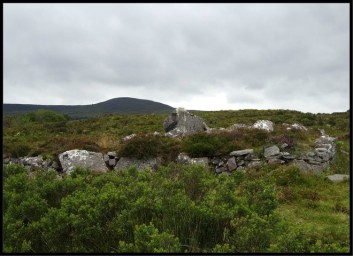 Location On the west side of the R281 about half way between Kiltyclogher and Glenfarne.

This blog entry is one of a group (loop) of entries on Bundoran, Ireland. I suggest you continue with my next entry – Rainbow Ballroom of Romance – or to start the loop at the beginning go to my introductory entry – On The Wild Atlantic Way.

One thought on “Prince Connnell’s Grave”