Bundoran Golf Club – Golf – If You Must

With advancing years, there are a declining number of things about my early life that I can recall with absolute certainty. One thing that I am absolutely sure of is that I have played golf three times in my life; once on a cold, miserable winter’s morning in Blacklion (not far from Bundoran), once in the sweltering heat and unrelenting sun somewhere close to Estapona in Spain and once here at the Bundoran Golf Club on a pleasant but windy day. Yes, I was dragged screaming on all three occasions.

In addition to this, around thirty years later, I totally voluntarily examined a rather peculiar golf course on Ascension Island in the middle of the Atlantic Ocean. For what it’s worth, the weather was fine that day.

Based on the above varied experiences, well actually before I even had them, I concluded that golf was not for me. As such, I proffer this review only because I know that some people do actually enjoy this most peculiar pastime.

There is no doubt that the Bundoran golf course (a challenging par 70) is stunningly positioned along the rugged Atlantic coastline. It’s position does however make for difficult play on a windy day, of which there are many. The undulating course affords fantastic views right out into the Atlantic to the west and of the Dartry Mountains with the very distinctive shape of Ben Bulben to the east (to the right and rather clouded-in in my final picture below). The view hasn’t changed in the thirty years since I played here, though on my latest visit I enjoyed it from the Rougey Cliff Walk which skirts much of the golf course along the edge of the headland/cliff (more view pictures in my walk review on this page). 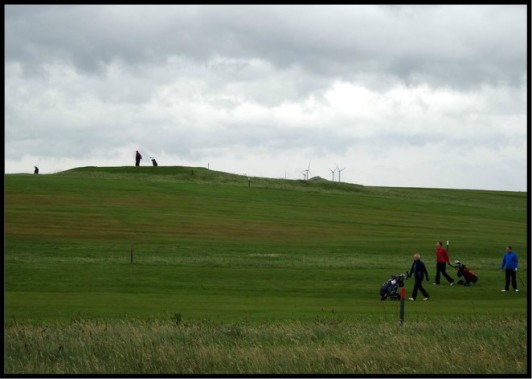 I had a quick look at the clubhouse and it appears to have all the facilities one would expect of a course of this calibre so there is a pro-shop and changing rooms and clubs and trolleys/buggies can be hired.

Naturally, there is a 19th hole which offers a full bar service as well as limited food/snacks, Sky TV and a snooker table. The 19th hole is strategically placed such that is can be readily accessed from the 18th and also the 9th – a bonus if the weather were to become unobliging or one was feeling dehydrated. An alternative, more stylish and more expensive, 19th is available, metres away, in the Great Northern Hotel.

Full details of fee options can be viewed on the clubs web-page. Not having played golf in 30 years I would not dare to comment on the value for money of this course over others in the area.

This blog entry is one of a group (loop) of entries on Bundoran, Ireland. I suggest you continue with my next entry – Great Northern Hotel: “The Grand Old Lady of Bundoran” – or to start the loop at the beginning go to my introductory entry – On The Wild Atlantic Way.