Throughout the later part of the 19th century and into the 20th century the Hordern Family dominated the Sydney retail trade. Beginning with ‘Mrs Hordern’s’ drapery shop in 1823, Anthony Hordern and Sons soon became the largest department store in Sydney, with businesses in Europe, America and China.

By the end of the 19th century potable water was in short supply in Sydney, particularly so in working class suburbs like Pyrmont.

Samuel Hordern, in an early example of late 19th century philanthropy, offered the City Council a drinking fountain and a piece of land on which to erect it, here in Pyrmont. The offer was accepted – ‘the provision of drinking fountains at which wearied wayfarers may quench their thirst being one of the first cares of the civic fathers’ of the day, according to the Sydney Morning Herald of Dec 23 1896.

In 1896 the Hordern Fountain was erected exactly where it can still be seen today, though it is no longer in working condition. As it is situated on the edge of what is now a busy intersection do be careful not to back out onto the road if taking pictures. 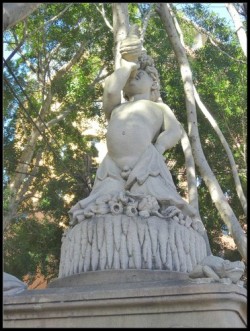 The fountain, created by W P McIntosh, features two semi-circular drinking basins attached to a sandstone pedestal on top of which is a nicely carved sculpture, by Jacek Euszczyk, of Cupid drinking from (or perhaps just blowing?) a conch shell.

The article in the Sydney Morning Herald referred to earlier went on to lament that within weeks of the Hordern Fountain being installed it was practically a wreck due the actions of ‘miscreants who probably will never be brought to account.’ How nothing changes!