There are two ways to enjoy hot air balloons in Canberra – one – take a ride in one, and two – stand or sit and watch them.

Every year in March/April Canberra hosts a ‘balloon spectacular’ lasting a couple of weeks. The idea is that up to 50 balloons gather together each morning on the lawns of Old Parliament House. The balloons, which come in all colours, shapes and sizes start inflating just after 6am and take to the skies between 6.30 and 7.00am. Get there in time to see them inflating and gently drifting skywards, a truly amazing and surreal sight. 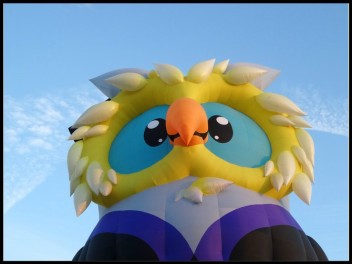 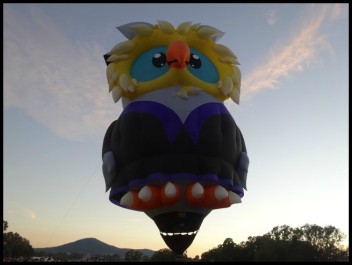 The event has become very popular over the years and breakfast, drinks and on ground entertainment is available until around 10am by which time the balloons will have returned (unless they land elsewhere – depends on weather conditions).

The Canberra balloon spectacular is one of the top three hot air ballooning festivals in the world. Some of the unusual balloons that have participated in the festival in the past include a pair of dancing honey bees, Vincent Van Gogh’s head, a windmill, a tropical tree, a turtle, a Scottish bagpiper and the incredibly ugly Skywhale. See my 2014 review Balloon Spectacular – Up, Up and Away for some of the balloons at the show in 2013 and 2014.

A diversion on Skywhale (picture below Canberra Times 2013, Canberra), if I may. It took the skies in 2013, and was actually from Canberra (very controversially paid for by taxpayers, like me ?), but only flew here once or twice. It spent most of its life touring the world. The last I heard of Skywhale was that in March 2015 it was attacked and ‘killed’ in Yass (about 50kms from Canberra) by a man yielding a kitchen knife attached to a broom handle. When asked if there was any deep and meaningful reason as to why he had killed the Skywhale, Mr Ahab responded, in a typical Australian manner, “Nah mate, just f-ing hate that bloody whale.” Skywhale has not been seen since and its website no longer exists.

May 2017 update  –  According to the Canberra Times Skywhale is alive and well last seen in Sao Paolo, Brazil and is now supposedly back in Melbourne. It would seem that even though Canberra paid for the creation of the balloon the city cannot not afford to have it fly here!!!!!!

Ballooning, as you may know is highly weather dependent and on the morning I turned up – the first day of the show – only 6 balloons were inflated but, due to wind conditions, none took off. The remainder took of from another location. The following morning (the morning I wrote this review), nearly 40 took off form Old Parliament House! 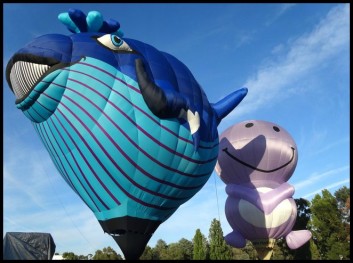 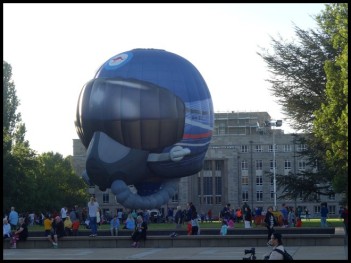 While I have not taken to the air, flying over Lake Burley Griffin, Parliament and the other buildings of national significance must rank as one of the more scenic flight routes in the world and something I want to do at some point (when I win the lottery!).

There are a number of ballooning companies in Canberra all to eager to take you for a ride. Flights are offered (weather permitting) all year round and not just during the festival period. Autumn is certainly the most popular time. Google to find an operator. Flights (45mins – 1hr) cost around $300 per person. Wrap up well (especially if your going up in a balloon) as there is often a chill in the air at this time of year this early in the morning.

Caution: Don’t drive around the city watching the balloons as you drive. You won’t be the first person to have a prang from so doing and get fined for dangerous driving. Pull over and watch.

For the record – due to weather conditions the 2017 show was a total flop.