Foundation Stone – What is it? 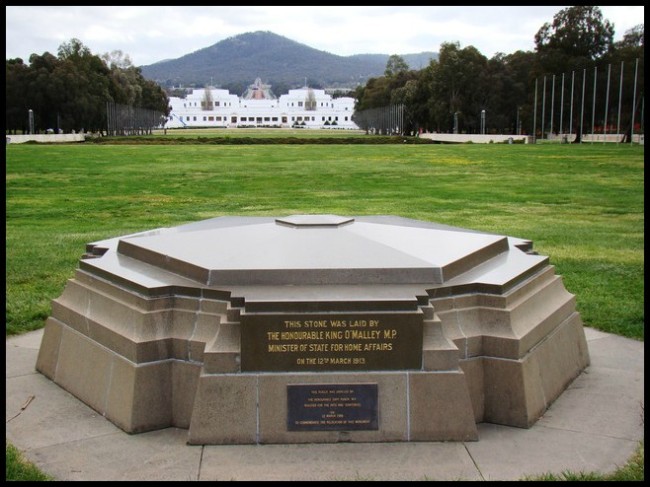 I first came across this about in mid 2012 and despite examining it closely I had no idea what it was. All I could tell from it was that three people including King (that was his first name not his title) O’Malley and two others had laid a stone on 12 March 1913 and the whole thing had been moved to its current location on 12 March 1988 (to make way for the construction of Parliament House). I took the attached photo (the first one!) and carried on about my business.

All was revealed in 2013, the centenary year of Canberra. This is the Canberra Foundation Stone (officially the Commencement Column Monument) which marked the official naming of Canberra on 12 March 1913. The naming ceremony was carried out with great pomp and circumstance (photo 2) and city foundation stones were laid by Governor General, Lord Denman, Minister of Home Affairs, King O’Malley and Prime Minister, Andrew Fisher. 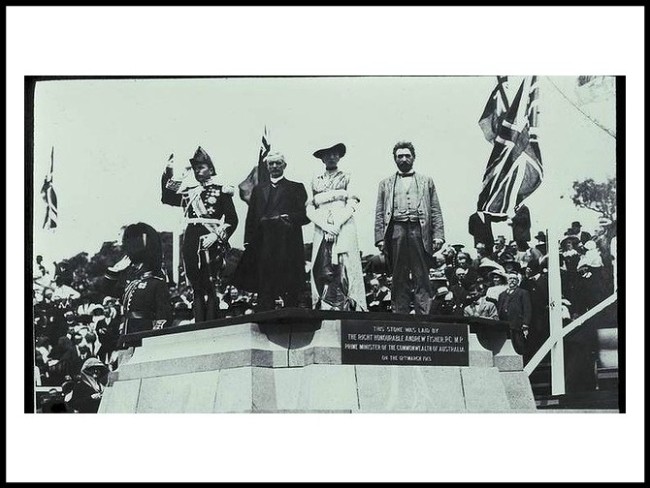 Unknown, at the time, to Lady Denman who formally named the city “Canberra” great attention was being paid to her pronunciation as she unwittingly settled a dispute. There had been widespread disagreement as to how “Canberra” should be pronounced so it was agreed that however Lady Denman pronounced it on the day what would be the pronunciation henceforth. And so it was.

There are six sections to the Stone, representing the six colonies of Australia before Federation. The Stone was designed by the chief government architect, John Smith Murdoch.

The 1913 ceremony was re-enacted by the current Governor General, Premier of the ACT and Prime Minister on 12 March 2013.

A rather amusing anecdote from the original ceremony was that alcohol was banned by King O’Malley a strict teetotaller (he had it banned for a period throughout Canberra). It is somewhat ironic that the most famous Irish pub in Canberra is called King O’Malley’s. As it happens, O’Malley was also not Irish. For the record, champagne flowed at the 2013 re-enactment but we are assured that it was heatstroke that caused six soldiers to wilt and collapse at the ceremony and not the champagne.