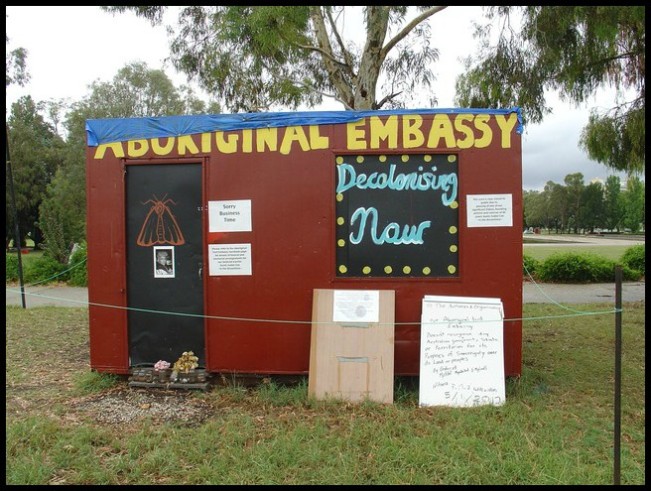 While a self proclaimed Embassy this assortment (varies in size) of tents and caravans is an Embassy in name only and is rather an ongoing Aboriginal protest. It has no diplomatic status.

In April 1971 the Northern Territory Supreme Court decided against Aboriginal people and in favour of a mining company to have access to Aboriginal land. Australian common law, the justice concluded, did not recognise Aboriginal land rights.

The Embassy, established on Australia Day, 26 January 1972 by planting a beach umbrella on the lawn in front of Parliament (now Old) House was set up in response to Prime Minister McMahon’s Government’s refusal to recognise Aboriginal land rights. The umbrella was soon replaced by tents and Aboriginal and non-Aboriginal supporters came to protest. A loophole in Australian Capital Territory (ACT) laws allowed camping on the laws of Parliament House as long as there were less than 12 tents. 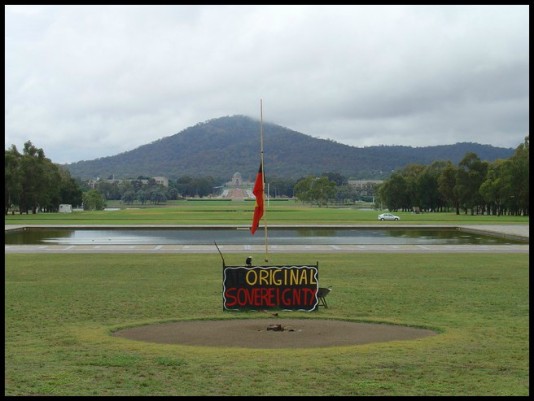 A list of fanciful demands presented to Parliament in February 1972 was rejected and police moved in, removed the tents (the Federal Government having overruled the ACT law I referred to above), and arrested eight people. In October 1973 around 70 Aboriginal protesters re-established the Tent Embassy which was again destroyed in May 1974 – this time by a storm. Between 1974 and 1992 the Embassy appeared and disappeared numerous times.

In 1992, on the twentieth anniversary of its original setup, it was re-established and despite on going controversy, suspicious fires and calls for its removal (including by local Aboriginals) it has remained in existence and indeed in 1995 it obtained a heritage listing. By this stage Parliament had moved to its current building so the embarrassment of having people camping on the lawns of Parliament no longer existed.

While the personalities have changed over time the protest remains broadly the same with the protesters claim (perhaps simplified) being that they have been dispossessed of their own country – Australia – hence the need to be represented in Canberra via an Embassy similar to any other foreign country.

Over time the aims of the Embassy have moved beyond its original brief of land rights and it has served as a focal point for the broader Indigenous movement on a much broader range of issues. While generally low key and peaceful since 1992, the Embassy made front page news again in 2012 when protesters, marking the 40th anniversary of the original protests, stormed a restaurant where the Prime Minister Julia Gillard and Opposition Leader Tony Abbott were attending a function.

Protesters welcome visitors so, if inclined, do go, sit down by the fire (Fire of Peace and Justice) and have a chat.