Two buildings in Canberra rank high in the stakes as being the most hideous looking buildings in Australia – both these buildings are beside each other. One is the High Court of Australia and the other is the National Gallery.

Ok, so I don’t like the building and it was for this reason it was not for some 12 years after moving to Canberra that I actually decided to have a look inside. I thought to myself – it’s what on the inside that counts, isn’t it?

I guess what one thinks of the inside (or indeed the whole set-up) is very much dependent on whether one is there at Her Majesty’s (or is it the Governor-General’s?) invitation to appear before the learned judges, of this the highest court in Australia, or whether one is visiting at ones own volition.

To remove any doubt my reader may have – I fell into the latter category.

Inside this cavernous monstrosity are three small court rooms and a suite of administrative and judicial offices. The balance of the building, volume wise by far the greatest part, is a giant multi-story lobby and staircases. 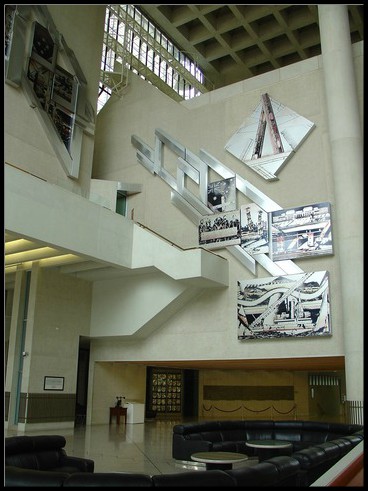 You might think I don’t like it internally either. This is not the case and in spite of the 1980s bright orange carpet or perhaps because of it I actually quite like it internally and it is certainly worth a visit. The 1980s public areas décor/colour scheme, which is continued into the courts themselves, was personally selected by the Chief Justice of the day.

As noted earlier the High Court of Australia is the highest court in the Australian judicial system and first sat (in Melbourne) in 1903 when it comprised 3 Justices. It increased in size until 1946 when it reached its current size of 7 Justices appointed by the Governor General. The Court transferred to Canberra in 1980 – the building was opened by Her Majesty Queen Elizabeth II. The main entrance of the Court is approached by a long ceremonial walkway replete with water cascade feature which runs the full length of the thereof.

Most of the courts work relates to appeals against decisions of other courts though there is no automatic right to have an appeal heard by the court. Decisions of the High Court on appeals are final. Other activity relates to cases involving the interpretation of the constitution (brings to mind the iconic and classic Australian movie “The Castle”) and those involving a principle of law deemed by the court to be one of major public importance.
A small but interesting display of historical items is located in the main lobby while the walls are modestly and tastefully adorned with some reasonably interesting artwork including a six piece mural by Jan Senbergs designed to reflect on the history, functions and aspirations of the Court. 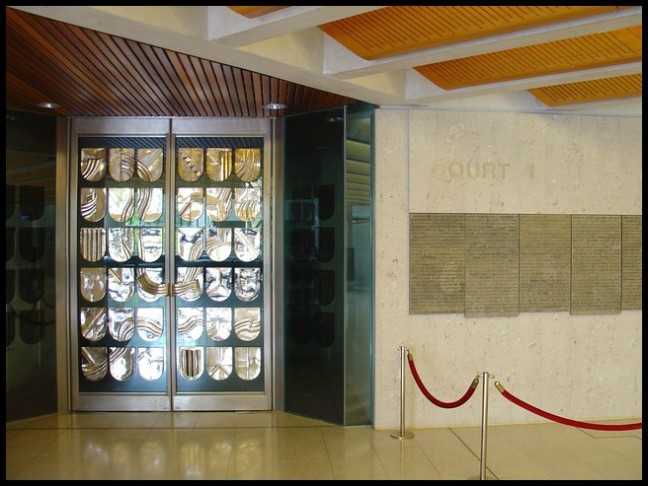 Court 1 (entrance depicted above) – which is used for all ceremonial occasions and in all cases where the Full Bench of the seven Justices of the Court is required to sit was closed for refurbishment when I first visited. On a subsequent visit a court guide gave us a wonderful account of the courts history and workings.

Court 2 – is used where a full court of five Justices is required – see picture 3.

Court 3 – is for matters dealt with by a single Justice.

All the courts are of modern layout with Australian wood featuring heavily throughout.

Court Guides are on hand to introduce you to the history, role and operation of the Court and its building. On days when the Court is not sitting information sessions are offered in the Public Hall and Courtroom 1 at 11:00am and 3:00pm. On Sundays, one session is held at 2:00pm. Outside these hours guides are generally available to answer your questions.

If the Court is sitting, you can watch proceedings.

Court sitting details
Normally, the Court sits in Canberra for two weeks of every month, except for January and July when it is in recess. High Court sittings are open to the public. Normal Court sitting hours are from 10.15 am to 12.45 pm and 2.15 pm to 4.15 pm.

General opening hours
9.45 am to 4.30 pm Monday through Friday, except public holidays
Sundays from midday to 4.00 pm.