For two reasons, I suspect, not many people visit the RAN Heritage Centre.

Firstly, from the name they have no idea what it is – it is the flagship museum of a small number of Australian navy museums – and secondly, they hear reference to its location on Garden Island, an active naval base, and assume it is going to be difficult to visit for security reasons – it is not.

Please don’t be one of the many who miss this wonderful museum – and, as an added incentive, it’s free to enter.

The museum and the northern tip of Garden Island to which visitors have access ( see Getting to Garden Island/RAN Heritage Centre section below) are well worth 2-3 hours of your time to get a real insight into the history and work of the Australian navy – not to mention the stunning views you get from the short ferry ride to and from Garden Island, and from the Island itself.

While the museum displays touch on colonial times (1788 – 1901), and thus Australian links with the British Royal Navy, the primary focus is on the Royal Australian Navy (RAN) which came into existence shortly after Federation – that is the establishment of Australia as nation state on 1 January 1901.

The museum covers all aspects of the RAN’s history in an interesting and informative manner via exhibits of naval hardware, ordnance, navigational aids and instruments, uniforms, personal memorabilia, paintings and pictures, videos, a working periscope, etc. There are loads of artefacts covering all aspects of life in the navy from gunnery to stores, from aviation to navigation and much more.

The torpedo depicted above is a World War II Mk 9 21” Surface Launched Torpedo, one of only two known to exist to-day, while pictured alongside 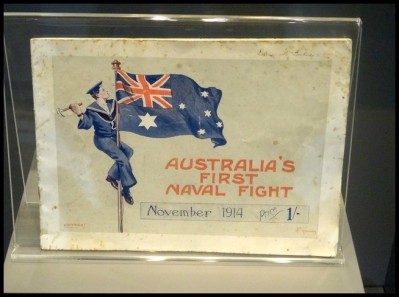 is a souvenir booklet telling the story of Australia’s first sea battle resulting in the successful defeat of the German SMS Emden by HMAS Sydney in 1914. This early World War I victory (though not without Australian casualty) and resultant jubilation for Australia was very soon marred by disaster at Gallipoli and enormous casualties on the Western Front. The museum has quite a number of exhibits related to the SMS Emden – HMAS Sydney encounter, not least being a SMS Emden 4.1” gun and mount, on display outside the museum on the foreshore.

The most moving exhibit in the museum for me was another ‘war trophy’, this time the conning tower from one of the Japanese midget submarines that attacked Sydney Harbour on the night of 31 May 1942 – see my separate review – M22 and the Japanese Attack on Sydney Harbour. 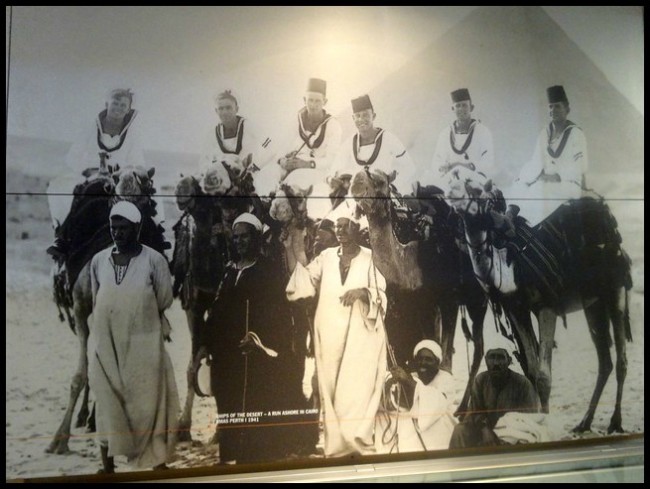 What also especially appealed to me, about the museum, was its evidently strong emphasis on exposing the visitor to the full life (ok, not everything!) of a sailor – so not only their professional work but also what they did, and do, when not on duty, their pastimes and naval traditions. Pictured above are half a dozen sailors from the HMAS Perth swapping that ship for ships of the desert while on shore leave in Cairo in 1941. One particular display case, detailing a most interesting tradition which I had not heard of before, caught my attention and I have written a separate review on that tradition – The Esther Williams Trophy.

In addition to the SMS Emden gun referred to earlier, also outside are various other items such as the SEACAT missile launcher and director depicted above. While the ‘missiles’ in this picture are fakes, a real SEACAT missile (presumably unarmed) can be seen inside the museum. I have very vivid memories of the British Royal Navy’s use of SEACATs in the Falklands War in the early 1980s. Various Australian ships were equipped with them until 1993, when they were decommissioned.

To be honest and without meaning to detract from the quality of the outside museum exhibits, you will most likely spend as much time outside admiring the Sydney Harbour views as you will looking at memorials, missile launchers and other naval paraphernalia – and so you should as the views are gorgeous. Allow plenty of time to wander around this lower part of the island before making your way up to higher ground for even more stunning views.

Garden Island is an active naval base and public access is only permitted to the Garden Island Public Access Precinct on the north tip of the island. Unless you are on a bus tour, access is only permitted via Sydney Ferries using the Circular Quay to Watson’s Bay route. Ferries stop at the Garden Island Wharf during RAN Heritage Centre opening hours only and you must leave the island by the last ferry each day (around 4pm). The RAN Heritage Centre is a short walk from the wharf.