The Wharfie’s Mural at the Maritime Museum

The Wharfie’s Mural, part of which is on display in the Australian National Maritime Museum, is a classic example of working class art in Australia.

Socialist realist in style, the mural depicts the lives and struggles of Australian waterside workers as well as major themes in the history of Australian (and indeed international) workers more generally from the mid 1800s to WWII and beyond, all the time exalting the struggle of workers against oppression and extolling the power of unity.

The mural comprises dozens of snippets, vignettes and cameos covering all the important topics of the period for the working man (and to a much lesser degree, the working woman) – the eight hour working day, the power to elect trade union leaders to Parliament, the formation of the Waterside Workers Federation, Marx’s writings, the hated ‘bull’ employment system, WWI, anti-conscription, the General Strike of 1917, working conditions in the 1920s, the 1930s Depression and so on and so forth up to WWII and beyond. Even Adolf Hitler gets a look in (top right of the main panel actually on display and depicted above) – to avoid doubt, the Union was anti-fascist!

The mural was painted on the masonry walls of the canteen in the Waterfront Workers Union building in Sussex Street, Sydney. While local artist Rod Shaw was the inspiration behind the mural and drew an outline on the walls for part of it, he engaged with wharfies (wharf workers for my non-Australian reader) getting them to actually do the painting and add their own ideas between 1953 and 1965 – at least some of it, paint by numbers, if you like!

Chalk, pencils, crayons, oil paints or whatever came to hand, including house paint was used in the creation of what is truly a beautiful piece of work, even if you do not accept all of the views expressed therein. A small part of the mural, towards the right hand side in picture 3 attached was, for some reason, never completed.

When the Union moved offices in 1991 (just across the road), out came diamond edged cutters and the mural moved too, to be hung on the walls of the new building.

When the Union moved again, in 1995, it was decided to donate the mural to the Australian National Maritime Museum where, sadly, all but one panel of it (covering the 1930s Depression to WWII and the fight against Fascism), which is on display and depicted in my main picture, has been consigned to storage. 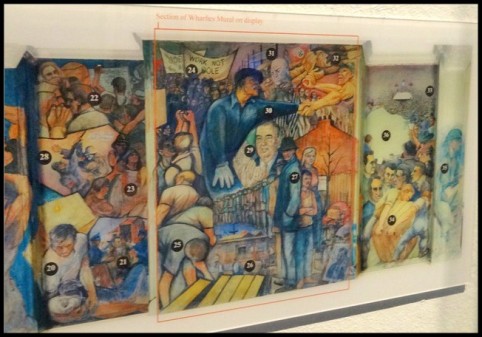 What is on display is a picture of the full mural (pictures 2 and 3 attached) – frankly an insult, if you ask me – and I know you didn’t! I strongly feel that the full mural, being a unique interpretation of working class life over an extended period, should be on display. I know and understand the argument that most museums can, sadly, only ever display a tiny proportion of their collection at any point in time. Space is not an issue here as there is loads of empty wall space where the solitary piece now hangs. Anyway, be that as it may, I do urge you to go along and view the panel that is on display in what is one of Sydney’s best museums and one of my favourites in the city.

Access details and opening hours are detailed in my general review on the Museum and on the museum’s website – http://www.anmm.gov.au/