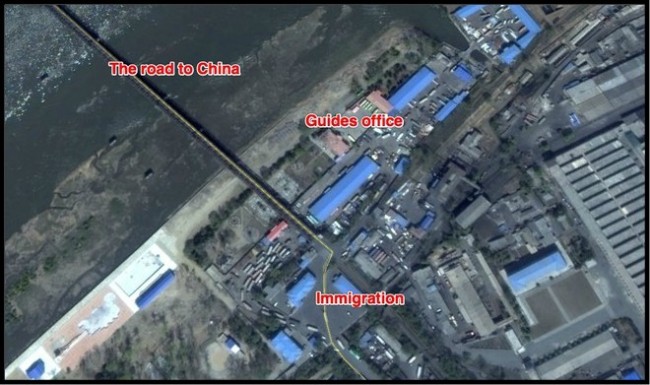 After lunch our passports, entry permits and exit cards had been returned to us and we were asked to sign the pre-completed exit cards which were written in Korean and completed in Korean. Having jokingly asked our guide what she had written about me on my exit card she had a second look and changed one answer explaining that I had now been converted from female to male. I signed the card, wondering what else might be incorrect on it and what fate might shortly befall me for ‘my’ false declarations.

Our trip from the guides office, where we had momentarily stopped (to visit the toilet, if you must know!), to the immigration office was all of a couple of hundred metres and, unsurprisingly, we were accompanied by our guides who indicated that they would walk us through the process which they ensured us would be completely painless on the grounds that they were well acquainted with the immigration officers. Needless to say, no photography was permitted from this point until we had passed through Chinese immigration in Dandong. My picture attached is a Google Earth image of the DPRK Immigration/ Customs area in Sinuiju which I have annotated with a few labels.

On arrival at the immigration office we had to await the arrival of officials who turned up after a few minutes. Our entry permit and exit cards collected (and not looked at) and our passports inspected, we were asked to put our bags through an x-ray machine which I suspect wasn’t actually working. No questions were asked about our cameras and none of our photos were inspected, much to our relief. See my review on exiting North Korea via train for more details on photos being reviewed/deleted at this crossing.

Within ten minutes of the immigration officers arriving, and having farewelled our wonderful guides, we were asked to board the bus for the short drive (50Yuan) across the Sino-Korean Friendship Bridge to Dandong. All in all, a very efficient and totally painless process as our guides had promised though, I suspect, greatly eased by their presence.

Already on the bus when we boarded was the group of Chinese day-trippers we had joined after lunch for karaoke and met again at the Ponbu Kindergarten Show. As they had just been on a day-trip from Dandong they didn’t have to go through immigration formalities.

The bus ride across the bridge to the Chinese immigration building took about five minutes where we again had to await an immigration officer to arrive. When he did, after our new guide had, he concluded that he didn’t have the relevant authority to process us as we had come from Sinuiju and not from Pyongyang. I suspect the young man was just confused as the arrival of foreigners from Sinuiju is still a very rare occurrence.

The returning day-trippers who had travelled just on ID cards were very quickly processed and on their way. After a good half hour’s wondering what to do with us and trying to get through to his superior on the phone he finally got through and found out that he did have the authority to process us after all. Within minutes we too were on our way. Thankfully our guide was able to explain what was happening as the officer did not speak English.

We had a couple of hours to pass before our overnight train to Beijing. Even before we asked our guide, who was here to take us the short distance to the train station, what we might do in that time he advised us that the nearest KFC to the station was about 100 metres walk. According to him, the most asked question by foreigners arriving from a trip to North Korea is, where is the closest McDonalds or KFC? Sad though it is, his answer was the correct one for our unasked question.

And so it was that we had the most delicious KFC that I have ever eaten (or so it seemed after 10 days in North Korea) before catching the night train to Beijing.

This blog entry is one of a group (loop) of entries based on my trip to Sinuiju, North Korea. I suggest you continue with my next entry – Chairman Mao Zedong – or to start the loop at the beginning go to my introductory entry – In North Korea – On the Border with China.

2 thoughts on “Our short crossing – Sinuiju to Dandong, China”