Our final activity in Sinuiju, and indeed in North Korea before leaving the country, was a visit to Ponbu Kindergarten where we were shown around the facility by the headmistress (Chief) and then enjoyed a wonderful show put on by the children.

Kim Ok Son, the headmistress, is a most amazing woman and both her and her school are famous throughout North Korea having turned out, over the years, countless child prodigies talented in music, calligraphy and fine art. The plaques and awards on display in the school testify to this work.

Kim Ok Son started teaching in 1968 and has been headmistress of this kindergarten for over thirty years. Thanks to her efforts, the kindergarten has come first in the National Art Festival of Kindergartens more than 20 times and its children have, on a number of occasions, taken part in the grand gymnastic and artistic performance, Arirang, in Pyongyang.

Also in this time she met Kim Il-sung and Kim Jong-il on numerous occasions and can count among her personal accolades the prestigious titles of Labour Hero and People’s Teacher. Being a modest woman, she credited her success solely to the guidance and wisdom she received from the Great and Dear Leaders over the years.

Having had a quick look around we took our places, with the group of Chinese day-trippers we had joined for lunch, in the school’s small performance hall and awaited the show to begin. 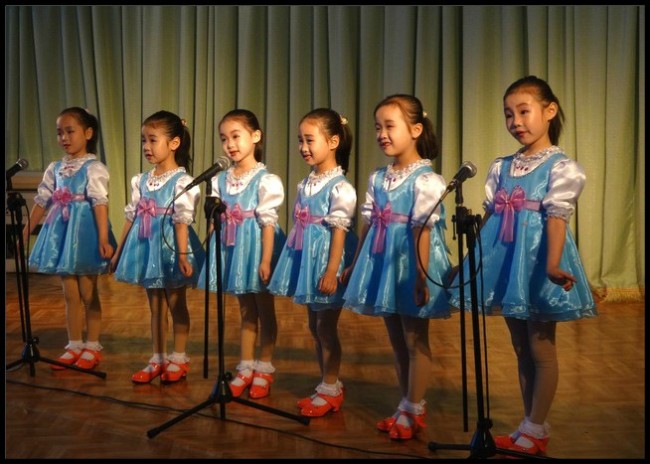 The show we were then treated to for about an hour was nothing short of spectacular and, for me, easily surpassed the much larger, more slick, and professionally produced show (which was also amazing) we had seen in the The Mangyongdae Children’s Palace in Pyongyang, principally due to the tender age of children here (none over 5).

The ability of these kids to sing, dance, perform acrobatics and play numerous instruments at the highest level was truly amazing. They were clearly well rehearsed and trained and a credit to their kindergarten and families. My only criticism is that they could go a little lighter on the make-up and the fake smiles but, on the other hand, even these added to the show in a most North Korean way.

At the end of the children’s performances we were treated to a small selection of songs and music performed by their teachers. While their contribution was most enjoyable too, the old adage of never sharing a stage with children or animals applies – you are bound to be upstaged as indeed the teachers were here.

After the show the cast (interestingly minus the acrobatic soldiers – pictured above) and teachers assembled outside for a group photo. One of our guides took great pleasure in introducing us to one of the young singers, a close relative of hers.

This show features on all visits to Sinuiju and for good reason. It really is hard to describe it here and the attached pictures cannot do it justice but I do hope they give you some small flavour of the show.

What a way to end ten wonderful days in North Korea and something I will not forget for a long, long time. Now it was time to leave the Democratic Peoples Republic of Korea.

This blog entry is one of a group (loop) of entries based on my trip to Sinuiju, North Korea. I suggest you continue with my next entry – Our short crossing – Sinuiju to Dandong, China – or to start the loop at the beginning go to my introductory entry – In North Korea – On the Border with China.