‘Youngsters’ in the Street 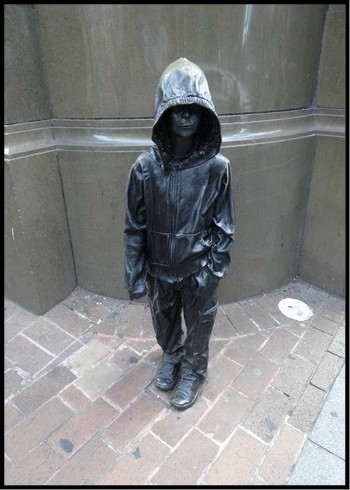 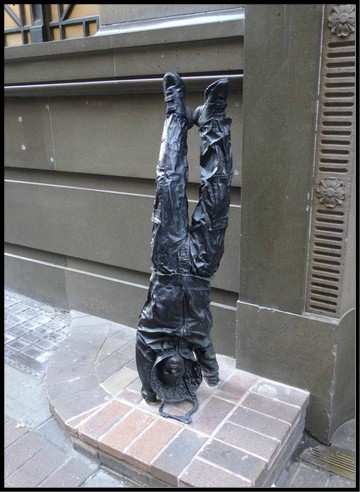 On the corner of the George and Barrack Streets (across George Street from Martin Place) I came across this bronze, almost life size, sculpture of a young girl in baggy pants and a hoodie. Looking around I could see no plaque or anything else telling me about the sculpture though I did notice a separate, similarly clad, youngster about 10-20 metres away further up Barrack Street at the entrance to the Burberry store which occupies this prime city centre corner site.

The only difference between the two, apparent to me, was that the second kid was hand-standing.

Still not knowing why the statues were where they are or what they represented I set about some research and have now ascertained that they are “Youngsters” by a local artist Caroline Rothwell and were created for an “Art & About’ festival in 2012. They were subsequently acquired by the City Council.

I read further (unenlightening gibberage to me) on http://www.cityartsydney.com.au/artwork/youngsters/ that:

“Youngsters stand within the trajectory of monumental bronze sculpture. The drapery, the shoes, and the contrapposto of one figure, are all influenced by art history from ancient classical sculpture to Rodin. Yet the forms, the baggy pants, hoodies, Dolce & Gabbana shoes, and handstand of the other figure, are contemporary………”

Upon closer inspection, the standing child has plaited hair, further undermining social expectations. The interiors of the hoods and clothes are coated with casts of quartz and coal, making a subtle comment upon Australia’s mineral economy”.

Spare me, I holler!

On closer examination of my pictures I now do agree that the shoes differ.

Ignoring the gibberage above, the pair of bronzes which I suspected represented, perhaps vulnerable, street kids present a very pleasant diversion and are worthy a look if you are in the area. On seeing them for the first time, they immediately brought to mind similarly seemingly random placed figures I have seen on the streets of Bratislava.

In the past month (June 2015) an unauthorised, professionally produced, plaque has been affixed to the wall behind the standing figure lamenting that “Children seeking asylum in Australia are kept in detention as part of a government policy which inflicts harm on refugees fleeing violence and persecution.” Asylum seekers are currently a politically hot potato in Australia, as they are, of course in many parts of the world.

The artist has indicated that she is delighted with the unauthorised addition. The City Council (which owns the building) seems less impressed.

The Burberry building is worth a look in its own right, being the listed former lavish Commercial Banking Company of Australia building built in 1925.

This is my last Sydney – City – BRIDGE STREET TO MARTIN PLACE review.
For other Sydney reviews click HERE.