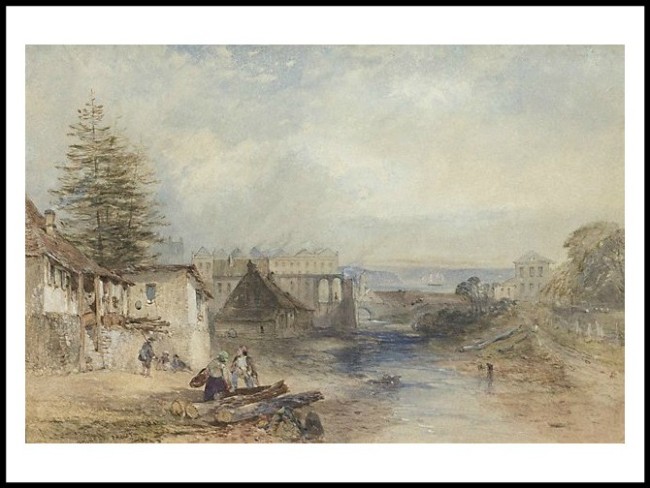 Writing back to his masters in London on 15 May 1788 the first Governor of the New South Wales, Arthur Phillip, wrote:

“…we had the satisfaction of finding the finest harbour in the world, in which a thousand sail of the line may ride in the most perfect security…”

Fine as the harbour may have been (and it still is), settlement would not have been possible without a readily accessible supply of potable water. 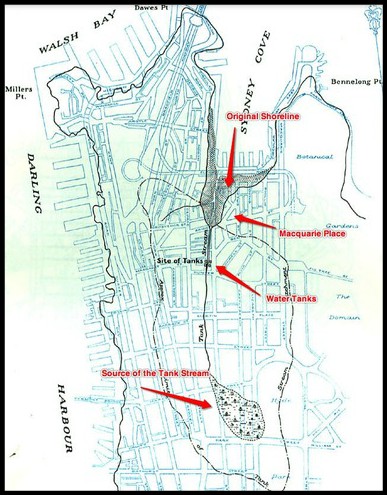 A small stream, soon to be known as the Tank Stream, originating in a swamp to the west of present day Hyde Park and, at high tide, flowing into Sydney Cove (now Circular Quay) at the intersection of Bridge and Pitt Streets provided the necessary fresh water supply for the establishment of a township (see attached sketch). There was no such water source at Botany Bay, the other location considered for the initial establishment of Sydney.

In his ‘An Account of the English Colony in New South Wales’ published in 1798, David Collins relates:

“The spot chosen for the settlement was at the head of the cove, near the run of fresh water, which stole silently along through a very thick wood, the stillness of which had then, for the first time since the Creation, been interrupted by the rude sound of the labourer’s axe and the downfall of its ancient inhabitants.”

Wander around and look as much as you like today but you will not see the Tank Stream.

In reality the stream never provided much in the way of water and in the first summer it totally dried up. So within a year convict labour was set to digging holding tanks along the stream to retain water for the town. These tanks, there were three of them, gave the stream its otherwise rather peculiar name, the Tank Stream.

As Sydney town grew, and despite a fifteen-metre green belt preserved on either side of the stream and a prohibition on cutting of timber and grazing of stock in the vicinity, the Tank Stream became contaminated and by 1826 had ceased to be used as a source of drinking water. 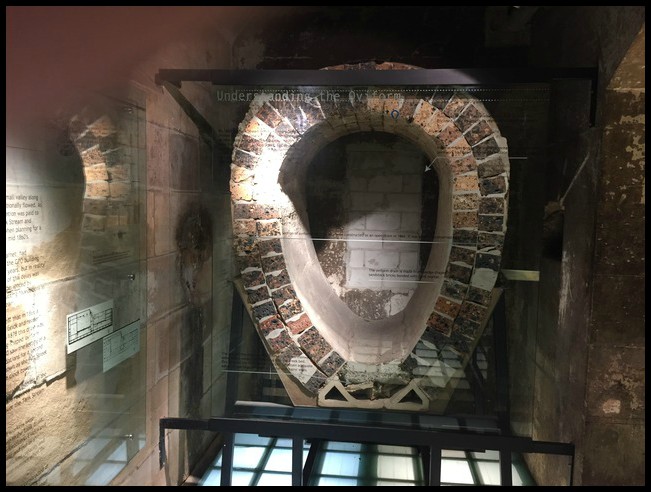 By the 1830s the Tank Stream and nearby creeks were used as an open drainage system for both waste-water and sewage. By the mid to late 1800s the Tank Stream had been converted into a bricked in sewage and drainage system which today forms part of Sydney’s stormwater drainage system, sewage having been diverted to a separate system. The egg shaped oviform drain design as depicted above (an original excavated section which you can see in the Tank Stream museum referred to below) was extensively used though some much larger channels exist further downstream.

While Sydney Water run occasional (twice a year – tickets by ballot) tours of lower parts of the Tank Stream drainage system those seeking to see relics of the Tank Stream should visit the small museum in the basement of the former General Post Office – GPO (now the Westin Sydney hotel) – entrance on Martin Place. The unmanned (and free) ‘museum’ is actually built into a basement bar area of the hotel and was a little tricky to find as I didn’t see any signs. Off course, I could have asked but I was happy enough having a look around the hotel while I located it. Should finding the museum make your thirsty there are ample bars where you can acquire a little something to quench the thirst.

The museum contains around two-hundred artefacts recovered from the Tank Stream system during engineering work under the GPO in the mid 1990s, mainly mid 19th century ceramics washed into the stream prior to its conversion to a sewage/drainage system.

While I didn’t spot any evidence of it in the museum, there is certainly evidence (alluded to earlier in my extract from David Collin’s 1798 work) of Aboriginal use of the original Tank Stream prior to European settlement. Evidence of an Aboriginal campsite was found during the development of the nearby Angel Street area in the late 1990s and it is known that Aboriginal people buried their dead along the Tank Stream. The present location of a skull found during building work on the GPO in the mid 1880s is unknown. At that time it was not uncommon for people to collect the remains of Aboriginal people or to sell them to museums or private collectors in Australia and overseas.

Back above ground there is a five part sculpture by Lynne Roberts-Goodwin (2000) which marks the course of the Tank Stream. One part, depicted in my final photograph, can be seen in Martin Place near the Cenotaph (just outside the former GPO). I will, at some stage, locate the other parts and visit a number of other Tank Stream relics which I have found out about through researching this review.

My first picture attached is a J Skinner Prout watercolour depicting the Tank Stream in the 1840s (courtesy of Art Gallery of New South Wales).

For my next Sydney – City – BRIDGE STREET TO MARTIN PLACE review click HERE.
For other Sydney reviews click HERE.