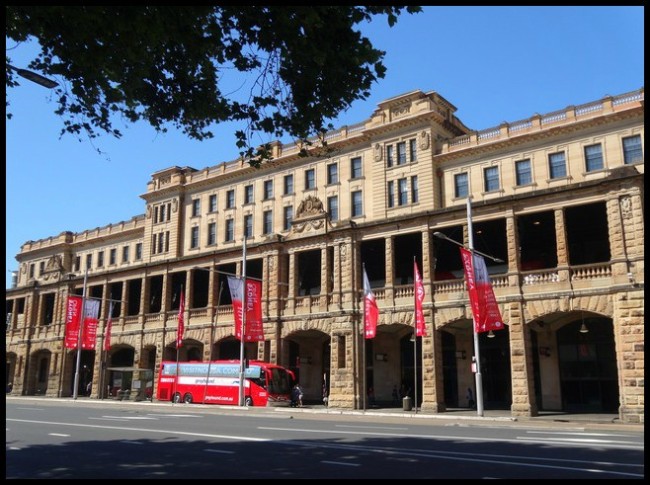 Sydney’s Central Station is one of a number of grand turn-of-the-century sandstone buildings in the city, albeit an outlier as the majority of these are located within a short distance of Circular Quay and the former Government House.

While only a few use it, mainly those arriving or departing on interstate trains or the city light rail line, the station has a formal approach on its western side and a main entrance on the above ground concourse/platform level. Most travellers access the main station building/concourse (when they do at all) from the local commuter lines on eastern side, the lower Eddy Avenue ground level via escalators and stairs or via the Devonshire Street tunnel which runs under the station tracks from the Railway Square bus interchange on the northwest to Elizabeth/Chambers Streets on the southeast.

This second station quickly became to small and the adjacent Devonshire Street Cemetery was acquired and cleared by the railway authorities, allowing for the construction and opening of the current station in 1906. The cemetery, then full, had been closed to burials since 1867. When it was acquired by the railway authorities in 1901, relatives of those interred therein were given two months to remove their beloveds’ remains – with all reasonable costs to be borne by the government! The no longer beloved, or less beloved, remains not removed were subsequently unceremoniously removed to the new purpose built Bunnerong Cemetery – rebadged as Pioneer Memorial Park in 1976 – by the authorities. It is little wonder that ghosts of the dead are still said to haunt to station. A benevolent society, a convent, a vicars residence, a police station, and a female refuge were also displaced to make way for the new station.

One section of the old station that did remain and become part of the new Central Station complex was a separate spur line and its terminal, Mortuary Station. While the Mortuary Station building still remains, this station, used to transport funeral parties, including the dead, to Rookwood Cemetery, experienced its own demise as a line for the departed in the 1940s. The, since restored and heritage listed, station is now rarely open to the public though I did manage to gain access in November 2015 when it opened as part of the annual Sydney Open (day). My regular reader will know of my strong interest in railways and cemeteries so when the two are combined you can imagine I’m in heaven, so to speak!

I have written separate reviews on Mortuary Station and Rookwood Cemetery so do let me return to Central Station now.

The station, built in Sydney sandstone, was designed by the then Government Architect, Walter Liberty Vernon and originally consisted of 11 platforms accessed from rather a grand, as was the custom of the day, terrazzo tiled concourse adorned with elaborate masonry and sheltered by a large vaulted roof – almost as it remains today. 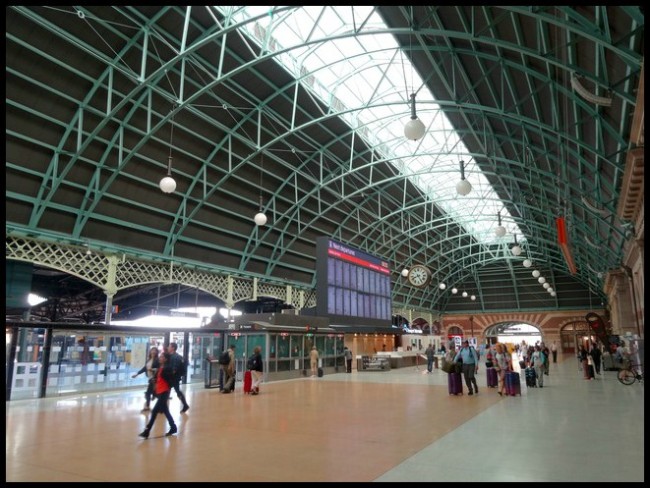 Speaking of terrazzo tiles, there is a large terrazzo map of Australia showing the country’s railway lines extant at the time laid into the floor of the former Interstate Booking Office (now café), off the main concourse – certainly worth a look. Additionally there are series of stained glass windows to the rear of the main concourse but sadly due to a lack of any back lighting (at least when I last looked) most people will not even notice them. 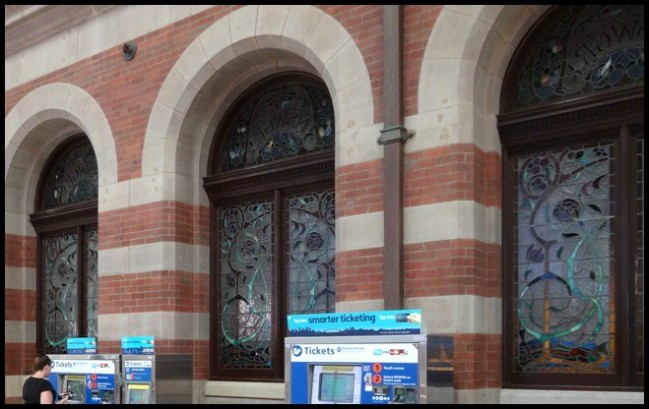 If you wander around the exterior of the main building you will encounter a fine array of colonnades, columns and arches.

While the station may have been grand the opening ceremony was not. The Sydney Morning Herald of the 6 August 1906 reported it as an non-ostentatious affair where “the Premier opened the ticket-office with a golden key, and the Minister for Works blew a golden whistle and waved a little green flag as a signal for the first train to start’. The ceremony was mainly attended by politicians and officials, the travelling public lamenting that it was too far out from the city centre.

An early addition to the station was the 75 metre tall Free Classical style clock tower. This was added to the north western corner of the building in 1921. 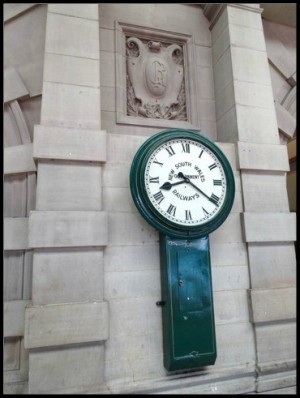 Over the years the station has been rearranged or added to on a number of occasions with the most notable additions being that of what are now platforms 16 to 25, on the station’s eastern side, and a six-track rail bridge on the north side, taking trains north towards the city and beyond before they go underground. Platforms 26 and 27, built at the same time, have never been used and are now referred to as the station’s ‘Ghost Platforms’.

A royal toilet, which was built for Queen Elizabeth has since been demolished but a dent in the marble pillar near the entrance to Platform 1 remains to mark the ‘Battle of Central Station’, wherein one man died and several were injured as World War I troops rioted in 1916.

I have prepared a separate review, under the transportation section of this page on train (and other transport) services operating from this station. In that review I also refer to the dire, indeed lamentable, facilities offered to the travelling public and visitors to the station.

Suffice it to say here, do not come to Central Station to dine or imbibe in your favourite tipple but do come for a look at the building itself, particularly if you are passing through/or by the station on a city rail or city bus service as you will invariably do, if you use public transport during your stay in Sydney.