Until mid 2013 Sinuiju was off limits to western tourists and those who exited North Korea by train only stopped in the train station for customs and immigration formalities which took place on the train, as they still do for those proceeding into China. Visitors from China could only enter on a day trip with no overnight options.

Since mid 2013 it has been possible to stop-over in Sinuiju. At present there is only one hotel at which foreign visitors can stay – the Amnokgang Hotel.

While a large building, it has a small and basic reception area with a nice new picture of the Great and Dear Leaders, I suspect especially hung the make foreign guests feel at home.

Our room was basic but clean and comfortable. We had uninterrupted hot water and electricity for the time we were there. I am not sure if the latter was because we were lucky, the hotel had a generator or because the power supply in Sinuiju is more stable than in other parts of the country.

I didn’t have an opportunity to check out facilities at the hotel though did notice a sauna in passing.

In terms of dining, apart from breakfast, we did not eat at the hotel but rather at a restaurant down by the Yalu River in our guide’s office which included a dining facility. We had breakfast in a small room with a single round table obviously set up for the three non local guests so I am not sure if the hotel has a restaurant (or indeed if it had any other guests the night we stayed) or not. Given its size I would be surprised if it didn’t have a restaurant – perhaps the restaurant remains off limits to foreigners still.

Talking breakfast, while basic it was perfectly acceptable and unlike other breakfasts we had it was very obviously an attempt at a western one – eggs as you like (we chose omelette), toast and jam with tea or coffee. 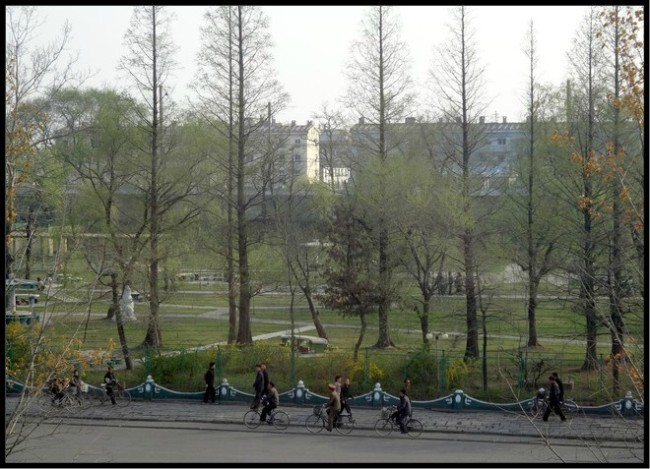 From our room, we had a view of the Sinuiju Folk Park which would be out first sightseeing stop.

Like everywhere else in North Korea we were unable to go anywhere in Sinuiju without our guides present so leaving the hotel on our own was prohibited.

Address: National Route 1 – not that you will be making your own way there-to or there-from!

This blog entry is one of a group (loop) of entries based on my trip to Sinuiju, North Korea. I suggest you continue with my next entry – Sinuiju Folk Park – or to start the loop at the beginning go to my introductory entry – In North Korea – On the Border with China.