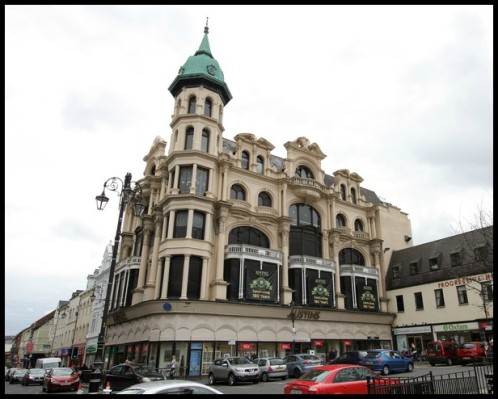 While this review is about a department store I have rarely had cause to shop here – my interest is in its history. I detest shopping.

Why do I mention these other old and much better known stores?

Well, Austins in Derry opened in 1830 and “is” the oldest independent (whatever that means) department store in the world. As you might imagine there are other contenders to the title of the world’s oldest department store, including to my surprise, David Jones’ in Sydney, Australia. 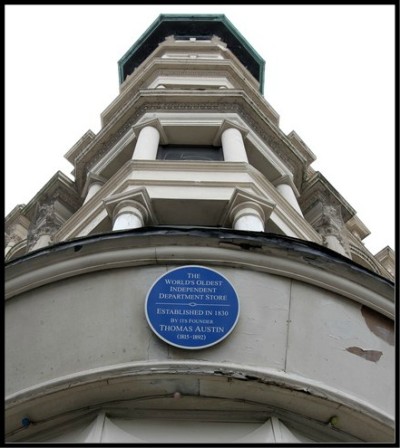 Back to Austins, the store, opened by Thomas Austin, started out as a small drapery store and has expanded, over the years, to its current five stories and 25,000 square feet of modern shopping space offering the full range of goods one would expect in a modern store – though still with that personal touch, missing from most modern day emporiums.

The current almost Gothic looking building, designed by Matthew Robinson (who also designed the beautiful Guildhall in the City), was built between 1904 and 1907 after the original store was destroyed in a fire.

The mix of varying shaped windows, balconies and turret complete with copper cupola, none of which one would ordinarily associate with a department store, make this a rather striking building, and certainly one not in keeping with the typical rather austere Edwardian buildings of the day. The store would certainly have dominated the central square of the City or the Diamond, as is known, when it opened and indeed it continues to do so today.

Typical of prestigious family businesses of the day, Austins had a large ‘family’ of loyal staff and working here was something very much sought after. Even in the 1930s, staff and apprentices lived in a dormitory above another shop in the Diamond, which was owned by Austins. Apprentices came here from all over Ireland to learn their trade and while board was provided free of charge the apprentices received no pay. In fact, parents generally had to pay a premium for their offspring’s training in this most prestigious of stores.

The store remained in the Austin family until 1976 when the business was sold to the Hasson family following the untimely death of Claude Austin in a boating accident in 1973. The store is still owned and managed by the Hasson family and flourishes notwithstanding several bombings during the Northern Ireland Troubles.

Certainly worth a look if you are in the City. Though I haven’t eaten there, the Roof Top Restaurant, comes well recommended for both its food and the views.

This entry is one of a group (loop) of entries based on many trips to Londonderry/Derry. I suggest you continue with my next entry – An Angel in The Fountain – or to start the loop at the beginning go to my introductory entry – The City on the Foyle.

One thought on “Austins – The World’s Oldest Department Store”