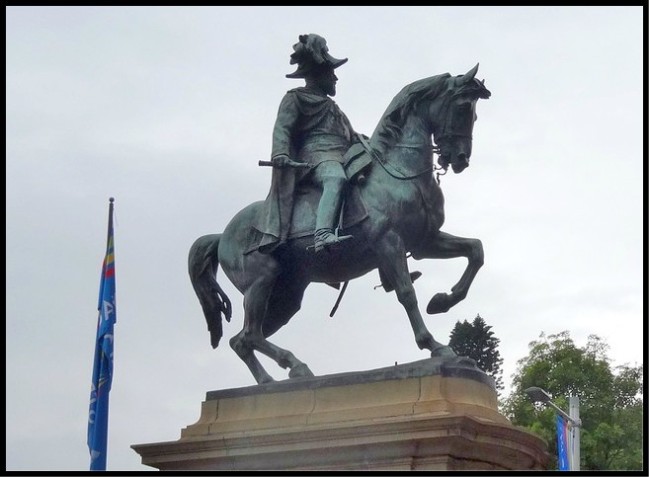 While equestrian statues were popular additions in many cities around the world in the early 20th century, few were erected in Sydney. This one of King Edward VII, successor to the long reigning Queen Victoria, is a rare example of such statutory in Sydney though the original intent was to construct this tribute to the King, and equally importantly to Empire, in the then newly established National Capital of Australia, Canberra.

Like so many times since, Canberra could not get its act together and while WWI delayed casting, the statue was unveiled in Sydney on Empire Day, 24 May 1922. Canberra did come to the party in 1953 when a memorial statue to Edward VIIs successor, George V, was erected in the capital.

George V, then Prince of Wales, had represented Edward at the opening of the first Commonwealth of Australia Parliament on 9 May 1901 in Melbourne so, perhaps it is more fitting that he, rather than Edward, get pride of place in Canberra which he does – though the story doesn’t end there. Enough on George V. Should my reader desire to read more on his memorial they should see my separate review ‘King George V Memorial – view spoiler?’ in my Canberra entries.

This bronze memorial statue of Edward VII, in full military uniform, on its sandstone plinth with a number of bronze reliefs emphasising the importance of Empire to Australia was created by Thomas Brock (1847-1922), one of Britain’s most prominent sculptors of the era. Brock’s most recognised work would have to be the central monument in the Victoria Memorial at the front of Buckingham Palace in London.

Edward VII was not dearly loved by Queen Victoria and indeed she blamed him for her beloved consort’s death. Albert contacted the typhoid which killed him in Cambridge where he had gone to reprimand Edward for a dalliance with an Irish actor. Victoria famously said of her eldest son, “I never can, or shall, look at him without a shudder”.

While waiting to ascend the throne, Edward lived the high life and acquired the reputation for being somewhat of a womaniser with at least 55 known affairs including those with actress Lillie Langtry and Alice Keppel who was a great-grandmother of Camilla Parker-Bowles. I will leave it for my reader to ponder this observation and decide if more modern parallels can be drawn.

Australians are not averse to a bit of fun and the decoration of public, even royal, statutory is not beyond the limits of decency. On a more formal level, in 2010 as part of the as part of the Art & About Sydney Festival, a number of statues were dressed up for a period. 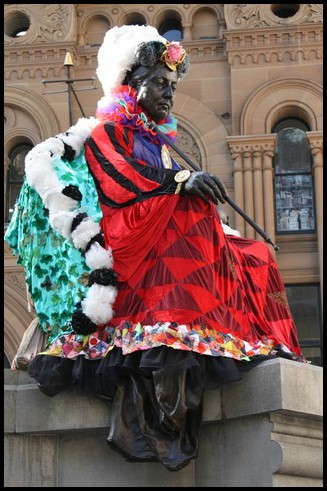 The colourful dressing of Edward and his stead are certainly in keeping with the King’s flamboyant reputation. On the other hand, I imagine Queen Victoria might not have been amused with her attire for the festival. Victoria normally takes on a more regal look as depicted in my separate review – ‘Queen Victoria – Transported from Ireland‘.

I must attribute pictures 3 and 4 attached to an excellent Sydney blog by Jim – http://sydney-city.blogspot.com.au