St Augustine’s – A Church of Many Names 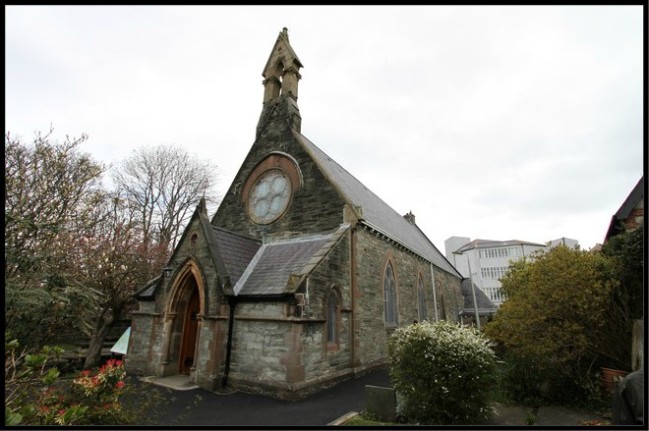 An absolute must see. A real highlight of my visit.

St. Augustine’s, known as the “Wee Church on the Walls” is built on the site of St Columba’s first monastery in Ireland which was founded in 546AD on “God’s Little Acre”, this site on the oak clad Hill of Derry given to him by his cousin, Aed, King of Cenel Conaill.

The original church, St Columba not wanting to cut down any trees unnecessarily, was built in a north south direction rather than the more usual east west orientation. Later churches, including St Augustine’s retained this rarer orientation.

In the 1100s, given the limited site size and the need for a bigger church, a new site was chosen (at the present site of the Catholic Long Tower church) for a larger church which came to be known as ‘Temple Mor’.

The original “wee church” came to be known as Dubh Regles (or The Black Church). By 1613, the church – by then under the control of the Augustinian Order and in a rather bad state of repair, was refurbished and used during the Plantation of Ulster by the first settlers from England, Wales and Scotland until St Columb’s Cathedral could be built. It was then known as “The Church of God in the Cittie of Derry”. During the Siege of Derry in 1688-89, a cannonball containing the terms for surrender fell in the church graveyard. This hollow cannonball can now be seen in the porch of the nearby St Columb’s Cathedral. The church was used by Scottish Presbyterians during the Siege and until, in recognition of their contribution in holding out against James II, Mary I provided funds to the Presbyterians to build their own church.

The Church was again rebuilt around 1795 by Bishop Barnard and became “Ye Chapel of Rest” to the Cathedral.

The present church, St Augustine’s, in a neo-Gothic style to the designs of JG Ferguson, was built in whinstone with sandstone dressings in1872. It was consecrated by Bishop Alexander, husband of world famous hymn writer Mrs Cecil Frances Alexander, upon whom I have written a separate review – There is a Green hill (far away) in the Creggan.

While damaged three times in the ‘Troubles’, St Augustine’s never closed for worship and today it remains one of the most beautiful churches I have had the pleasure of visiting anywhere in the world. While not architecturally outstanding I find it a most homely and welcoming place – most fitting as a place of worship or reflection – depending on the visitors inclination.

When inside make sure you:
• look up at the stunning open timbered ceiling,
• admire the very beautiful stained glassed windows.
• have a look at the bronze dove resting on a bronze book of verse on the window sill immediately to your right as you enter the main part of the church – a memory of St Columba the Scribe (the dove being the symbol of both St Columba and Derry). 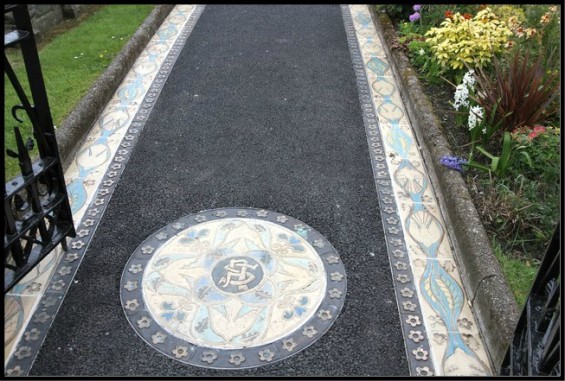 Outside, have a wander through the historic graveyard and admire the ceramic tiles along the edge of the pathway into the church – something rather unique, I think. I certainly have not come across it before.

On the right of the entry path you can see some pre-Siege graves including a headstone to Thomas Gaw and Elizabeth Montgomry dated 1668. While not marked, one of the last High Kings of Ireland, Muircertach Mac Lochlainn was “honourably” interred here in 1196.

For those seeking to explore the graveyard in greater detail, pick up a detailed guide from the church before you have a look around it.

For those unable to visit and indeed for those planning to visit, the church has created a wonderful Ipad/Iphone App available free from the Apple App Store. It contains a wealth of information and many great pictures. Do have a look if you can.

For some reason I have taken to reciting song and poetry in a number of my Derry reviews. Having come across this absolute gem on St Augustine’s (St Augustine’s Website) it seems appropriate to share it too:-

S.Augustine’s – The Church I Love

I have been in great Cathedrals
Up and down our land,
I have seen their Pomp and Splendour
And Ritual so grand,
I have knelt before their Altars
And in their pews I’ve prayed,
I have seen their great Memorials
As down their aisles I’ve strayed,
I have heard their bells a-calling
The Faithful into Prayer
Although I’ve gone and worshipped
My heart was never there.
I’ve heard the sweetest music
From their organs swell,
But my heart was in that little Church
The one I love so well.
It stands in Londonderry,
Upon the City Wall,
Nestling among the trees
The grandest of them all.
It has no lofty tower
It has no steeple tall

The Altar is not marble
It’s made of wood quite plain,
Oh! When shall I return for good
To worship there again?
To see good Doctor Trimby
Touch the organ keys,
And hear the choir a-singing
The hymns that always please.
To hear Mr Mac. The Rector,
On each Sabbath day,
Lead those lowly Irish folk
As they kneel and pray.
To sit among those folk,
The faces known of old,
The Scouts, the Cubs, the Rovers,
I’d give all this world’s gold.
I know I’m one of many
Who feel like that today,
As we work and fight for freedom
In places far away.
But some day in the future
We’ll all come marching home

This entry is one of a group (loop) of entries based on many trips to Londonderry/Derry. I suggest you continue with my next entry – First Derry Presbyterian Church – or to start the loop at the beginning go to my introductory entry – The City on the Foyle.

One thought on “St Augustine’s – A Church of Many Names”