Roaring Meg and other Cannons

As you stroll along Derry City Walls you can’t fail to notice an abundance of old cannons. The majority of these cannons, and many more no longer in existence, were presented to the Plantation Settlers of the City in the early 1600s by various London livery companies – including Fishmongers, Grocers, Salters, Merchant Taylors and Vintners – under the auspices of The Honourable, The Irish Society.

A slight diversion on The Honourable, The Irish Society, if I may?

The Society was created by Royal Charter (James I) in 1613 to undertake the Plantation in the North West of Ulster and importantly protect the Planters. The Society is still going strong after 400 years, now existing as a registered grant-giving charity working for the benefit of County Londonderry.

The Court of The Irish Society, as it is generally called, is a Board of Trustees chaired by the Governor, traditionally a former Lord Mayor of London, an elected Deputy Governor and Members of the Court of Aldermen and Court of Common Council of the City of London Corporation. You can’t get much stronger links with London than that!

While the Society has contributed significantly to the City over the past 400 years its most notable contributions were the construction of the City Walls completed in 1618 and the building of St Columb’s Cathedral which was completed in 1633. A tablet in the Cathedral reads:

“If stones could speak. Then London’s praise should sound. Who built this church and city from the ground”.

It was in recognition of donations from the livery companies and the Irish Society that the City was renamed Londonderry in the mid 1600s.

Back to the cannons. 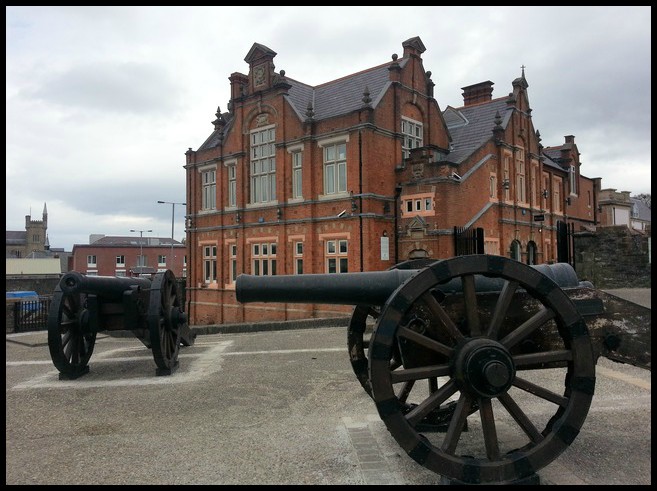 The largest of the cannons, and the most famous due to the noise it made, is the 18 pounder “Roaring Meg”, today located at Double Bastion on the southwest corner of the Walls (main picture). One account has it that “The noise of its discharge was more terrifying than the contents of the charge to the enemy.”

Roaring Meg was one of 24 cannons presented to the City by the City of London and the London Companies after the 1641 Siege which saw the slaughter of many Protestant settlers in various parts of the country. This cannon was presented in 1642 by the Fishmongers Company of London and was used for ceremonial salutes up to 1832. It and all the other cannons you can see saw active service during the 1688-89 Siege of Derry.

The two cannons on Church Bastion also form part of the 1642 batch of cannons and are from the Merchant Taylors’ Company of London.

All the cannons on display have been refurbished and made a reappearance on the City Walls in the mid 2000s. Intending visitors to the city can take comfort from the words of an economic development officer with the City Council who insists that the cannons were returned to the Walls for “tourism purposes” only!

This entry is one of a group (loop) of entries based on many trips to Londonderry/Derry. I suggest you continue with my next entry – St Augustine’s – A Church of Many Names – or to start the loop at the beginning go to my introductory entry – The City on the Foyle.

One thought on “Roaring Meg and other Cannons”