Like many medieval cities, Riga encircled itself with defensive walls. Originally these ‘walls’ were merely a deep ditch. This was later replaced by a rampart with a wooden fence on top. Over time, due to advances in munitions, these ramparts and wooden walls were replaced with dolomite (stone) walls.

Around the 16th century, given the use of of more accurate guns and cannon, Riga’s walls were increased in height and cannon platform and shooting positions appeared on top of the walls for added defence. To add further height, ditches were dug in front of the walls such that the fortifications stood between 8 and 11 metres high. 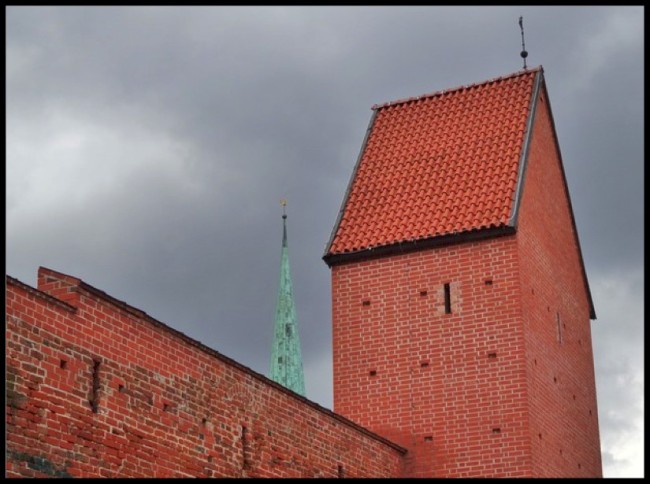 Security was further strengthened by the inclusion of 18-25 (depends on what account you read) towers which naturally had their own protections. Today only one of these towers – the Powder Tower – remains and it is only a few metres from the primary subject of this review. I refer to the smaller Ramer Tower, depicted in my first two pictures, later in this review.

Over time, and particularly after Russia wrested control of what is now Latvia plus more from Sweden in 1710 in the Great Northern War, the walls ceased to have any defensive value. Consequentially the walls were no longer maintained and decayed, were pulled down or were incorporated into buildings – essentially houses built up against them on either, or both sides. A good example of the latter outcome can be seen (though you would not recognise it as such) in Troksnu Iela. The houses on the right of the street as you make your way from the Swedish Gate toward Jekaba Iela (picture 4) are built up right against the wall – as are those on the other side of the wall at this point. 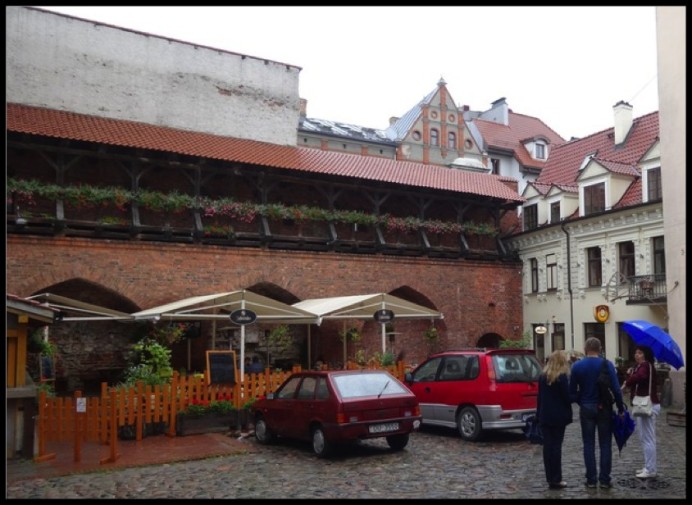 Incidentally, do you notice how narrow this street (and a few others where houses were built up against the walls) is? The story goes that in the days when respectable ladies wore lavish gowns a problem arose when they met in the street. The width of their gowns prevented them passing and neither lady wanted to loose face and step aside to let the other pass. This got to be such a problem that a magistrate had to rule that the younger lady would make way for her elder. I wonder how this was established as, surely, respectable ladies did not divulge their ages, especially in the street!

The only significant part of the City Wall, with Ramer Tower, that still exists is a section on Torna Iela (the outward facing side of the wall – main picture attached). The inward facing side of this section can be seen by walking along Troksnu Iela (turn left if you enter, into the Old City, via Swedish Gate). This section of the wall has been very heavily reconstructed (the tower completely) – most recently in 1987 and, sadly, as well as actually not being old it also doesn’t look old. Still, nice all the same as it gives one an idea of what the walls did look like. On the other side of Torna Street is Jacob’s Barracks on which I have written a separate review.

A smaller and less obvious section of the former City Walls can be seen in St John’s Courtyard (picture 5 attached) accessed via the entry way on the west side of St John’s Church or the Jana Seta from Kaleju Iela. Note how the building on the right in my picture is abutted right up to the wall.

This blog entry is one of a group (loop) of entries on the Old City area of Riga. I suggest you continue with my next entry – Powder Tower – or to start the loop at the beginning go to my first entry – SamaraH Hotel Metropole – Riga.

One thought on “Riga City Walls”