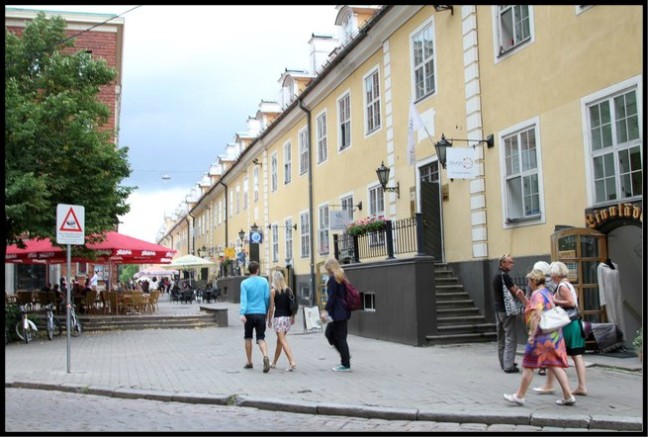 The Great Northern War saw Latvia move (not that it had any choice in the matter) from occupation by Sweden to occupation by Russia in 1710 and resulted in Riga’s fortifications and barracks being severely damaged.

In 1739 City Aldermen sought, and obtained, permission from Russia to build a military barracks that would house one thousand men on this site along Torna Street. Four wooden barracks were soon constructed. By 1772 the wooden structures had been replaced by the stone structure of the present day Jacob’s Barracks (actually three joined buildings with a length of 230 metres) though, like everything else in Riga, the Barracks have gone through numerous renovations and changes since construction. 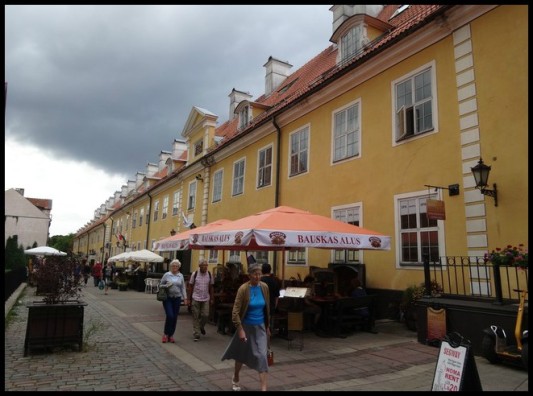 In the original Barracks all entrances and windows where on Torna Street as the rear of the building (Basteja Boulevard side) abutted city ramparts which meet the building almost at roof level. Tsar Alexander II gave permission to level the ramparts in 1858 and, subsequent to this, rear doors and windows were added to the Barracks on this side.

In addition to housing troops, over the years Jacob’s Barracks have been home to various government agencies, schools and stores and in the 1920/30s there were unfulfilled plans to convert them into a hotel and theatre.

During the subsequent Soviet occupations of Latvia the Barracks housed the Nahimova War School and the Supreme Command Centre of the Soviet Army’s Construction Department for the Baltic States.

Post independence in 1991 they returned to the ownership of the City of Riga and, after an extensive renovation, today they are home to shops, bars, restaurants, cafés, beauty salons and the like. What I could not find was any trace of the building’s original use – no museum or other information here. 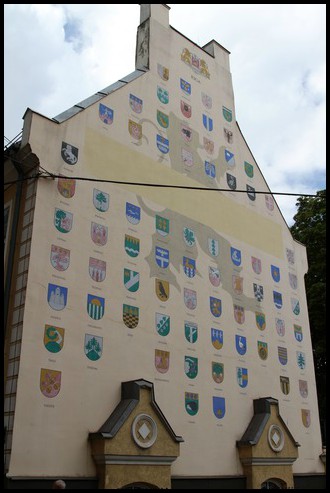 The east façade of the Barracks, by which you will most likely enter Torna Street, is covered with pictures of coats-of-arms of the towns and cities of Latvia.

On the other side of Torna Street, which is pedestrianised, is the most intact section of what remains of Riga City walls. Stalls selling souvenirs and other things pop up on the street. I had a quick look but nothing particularly excited me.

To-day, on Torna Street, the boots and guns of occupying armies have well and truly given way to the walking shoes and cameras of invading tourists. It is a great spot to relax over a coffee or something stronger as you make your way around the Old City.

This blog entry is one of a group (loop) of entries on the Old City area of Riga. I suggest you continue with my next entry – Riga City Walls – or to start the loop at the beginning go to my first entry – SamaraH Hotel Metropole – Riga.