Sleeping, Eating and Coffee from Heaven 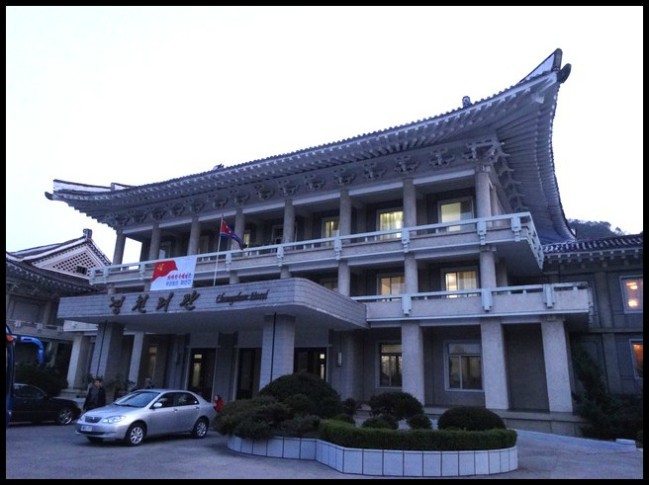 We were given a choice of two hotels for out overnight stop in the Mt Myohyang area. The first was the luxury Hyangsan Hotel, tucked away at the base of Mt Myohyang. A couple of our group, wisely, chose to stay here so we did get a look around – see below.

The majority of the group chose to stay at ( or rather it was the default for those who didn’t choose anything!) the Chongchon Hotel.

The Chongchon is nicely situated on the banks of the Chongchon River in town of Hyangsan. It was built in the 1950s with a classically Korean style exterior but a very distinctly Soviet interior. I suspect it hasn’t been renovated since it was built. 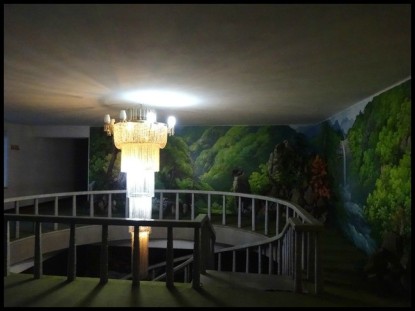 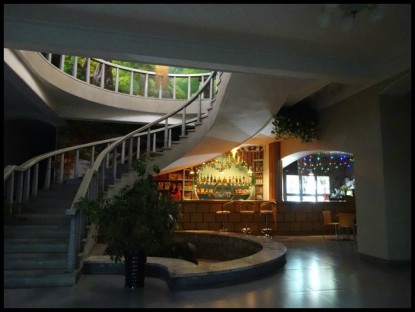 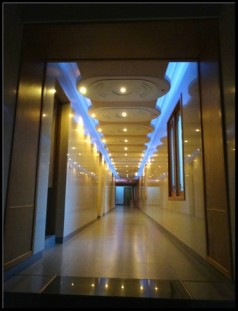 The public areas of the hotel, where not plain and cold, are gaudy in the extreme, with fake rock, coloured flashing lights where there shouldn’t be coloured flashy lights and generally ugly murals.

There is, however, one mural which is absolutely an exception to the rule and that is the rather grand (and large – around 3m by 8m) and, in my view, rather beautiful picture in the entrance area. It will come as no surprise to my Reader that it is of the Great Leader and the Dear Leader, here sitting in the hotel’s garden having a chat and a cigarette. 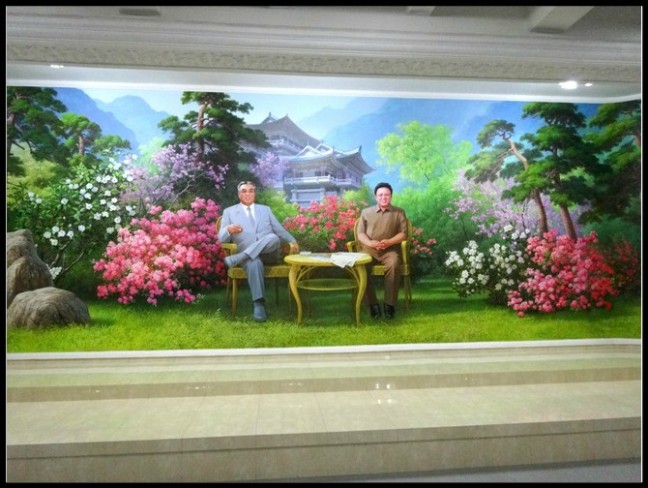 Gaudy, quaint, charming and such like I love – dirty, I do not. Our bedroom was disgusting and, for the life of me I still do not know why we didn’t ask for a change. The room stank of damp and mildew and opening the windows and doors did nothing to alleviate the problem. I ascertained that other rooms were similar, though I think we pulled the short straw and got the worst one.

While the public areas of the hotel (which also included pool and table tennis facilities, karaoke rooms and a bookshop which naturally only sold books by or about the Leaders) were fine (though the pictures attached make things look flashier than they were) the state of the rooms were such that I would not stay here again. Setting aside the stench, which in reality one can’t,  our room was extremely tired and not very clean. On the plus side it did have a nice view of the river and the mountains behind it though we chose to admire that from other locations.

Dining at the Chongchon Hotel

As is the norm for visitors to North Korea, where you eat is predetermined and included in the cost of your tour. No, deciding that you will skip the tour fare and nip into town for a hamburger, pizza or whatever else might take your fancy.

Dinner at the Chongchon Hotel (unlike its rooms) was of a reasonable standard and similar to that which we had become accustomed to elsewhere in North Korea. And so it was that we had an ample assortment of dishes, meat and vegetarian, all of which had to be consumed before the rice was brought out. I have lamented about/ explained this custom of bringing out rice at the end of the meal on another review so won’t dwell on it again here. Dinner was washed down with the usual beer and water though other drinks were available from the small bar/snack bar in the dining room. A quaint little quirk of a number of restaurants we ate in, in North Korea, was the presence of snack bar/shop at which you could stock up on food after having eaten in the restaurant!

Pleasant enough as dinner was, what I do want to draw the reader’s attention to is the coffee pot (plunger) pictured below. 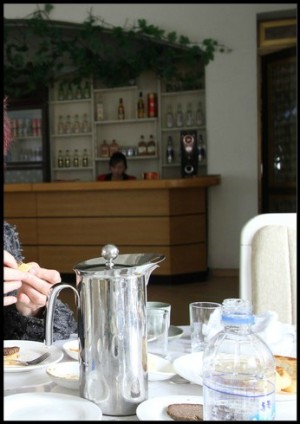 This I encountered at breakfast the following morning and on seeing it at some distance from the table I thought all my heavens had come at once. Coffee, to date on our trip, had been a rather foul tasting instant variety (ok, I am a bit of a coffee snob) so on seeing the coffee pot, accompanied by toast and some form of rissole affair, I made a beeline for it, poured a cup and, man (or woman!), did I enjoy it.

Looking around the table I sensed others were looking at me.

Whoops, I had just helped myself to another visitor’s private coffee. Luckily, I had been singing its praises as I drank it. The good lady owner, who from that point became my dear friend, had brought the coffee and the plunger pot from Australia. Thankfully, she didn’t mind me helping myself!

Despite the coffee, should you visit Mt Hyangsan and have the option, I strongly encourage you (and only because of the rooms) to pay the extra cost (a significant EUR 120 extra per person in 2015) and stay at the Hyangsan Hotel, but do pop in here, if you can, for a look at the gaudy décor and the Leaders’ mural which greets you on entry to the hotel.

Luxury in the Mountains 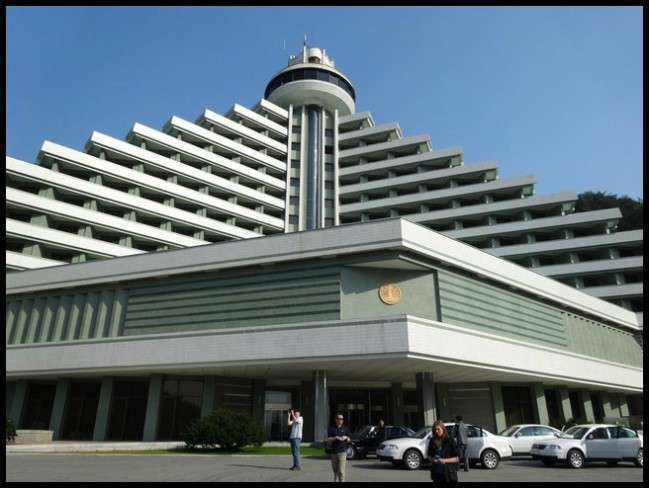 While I didn’t stay in the Hyangsan Hotel, I did spend some time in the lobby and a couple of others from our group did stay in it and gave me a first hand account of their stay.

The hotel is located in Mount Myohyang Historic Park though that has little meaning as you will not be able to leave the hotel to visit the park unless you do so with your full group, as part of your tour.

The 15 story, pyramidal hotel was refurbished in 2010 and is one of the most luxurious in the country.

Naturally, such an important refurbishment could not have been completed without the ‘field guidance’ provided by Kim Jong-il who observed, according to the Korean Central News Agency, that:

“It is a miracle that they {the soldier builders} completed the huge renovation project equivalent to the construction of a big hotel in a matter of less than four months”, adding that “this eye-opening success is a striking manifestation of the inexhaustible mental power of the servicepersons who created the revolutionary soldier spirit and implement the leader’s instructions in a do-or-die spirit”.

“The Korean People’s Army, which is playing a core and vanguard role in the general advance for a great revolutionary surge, is performing world-startling miracles and feats in every site of socialist construction at present”, he noted.

In this hotel (per those of our group who did stay there) everything works and there is electricity 24/7. The latter, in itself, might be deemed sufficient to qualify if for its 6 star luxury grading!

My friends particularly enjoyed the swimming pool, sauna and spa complex and indulged in the underground disco and karaoke nightclub though few others did, due to the fact that there were few other guests in the hotel. The food was also assessed as being of significantly higher quality than we had elsewhere. Naturally, this being a flash place in North Korea, it has a revolving restaurant; best enjoyed at lunch time, I suspect, rather then when everywhere around is pitch black at night, given the hotel’s isolated location. 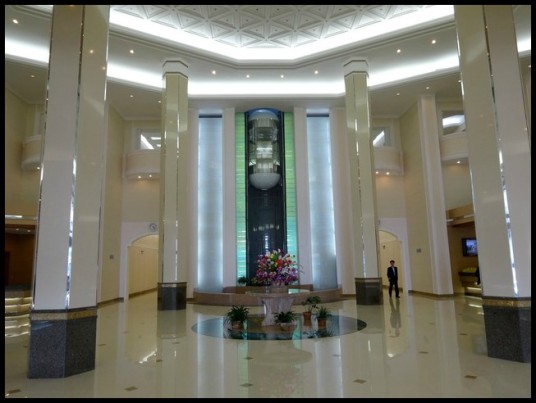 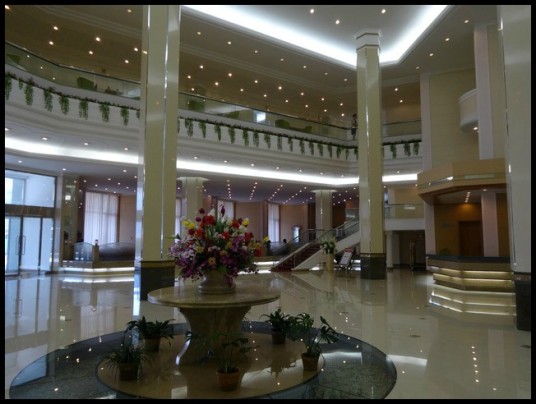 Certainly based on my visit to the lobby and conveniences it is an impressive place and worthy your consideration should you plan on visiting. Please be aware that you cannot upgrade to this hotel while you are in the country, so decide before you go. 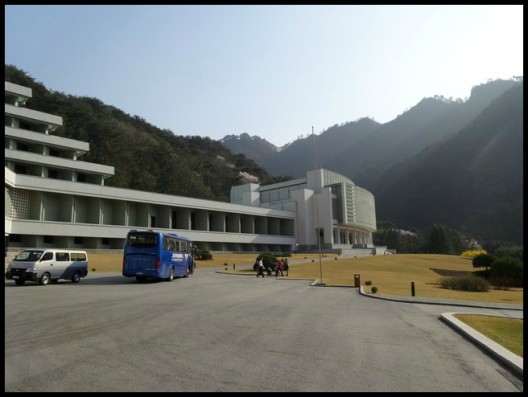 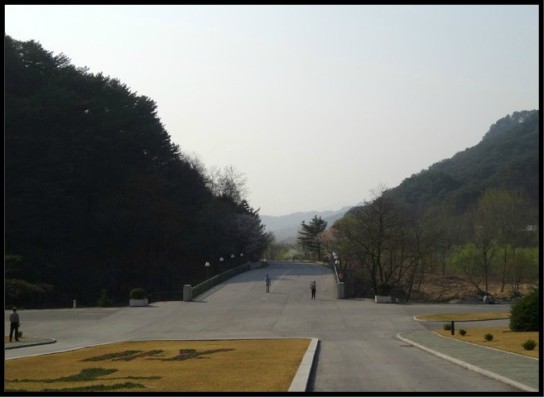 There are some nice pictures of the hotel on http://dprktourism.com.my/explore_dprk/attractions/mt_myohyang/hyangsan_hotel.php . The only thing that seems to be missing is guests.

From what I can ascertain this is the only hotel in North Korea to offer (in 2015) an internet (worldwide) connection, albeit at some exorbitant rate.

This blog entry is one of a group (loop) of entries based on my trip to Mt Myohyang, North Korea. I suggest you continue with my next entry – Eternal Life Monument – Yeong Saeng – or to start the loop at the beginning go to my introductory entry – Treasures in the Mountains.

2 thoughts on “Sleeping, Eating and Coffee from Heaven”