Mt Myohyang, in addition to being a favourite recreational area for the Great Leader, Kim Il-sung, and the Dear Leader, Kim Jong-il, is a sacred mountain area as, according to legend, it was the home of King Tangun, forefather of the Korean people.

In English Mount Myohyang translates to ‘mountain of a single fragrance’. That fragrance is juniper, best known to many, including myself, as the key ingredient in gin. Juniper bushes grow in abundance in this beautiful mountainous area which rises to nearly 2000 metres above sea level, about 160kms to the north-east of the capital, Pyongyang.

There are four major valleys and numerous walking tracks in what is a national park. Our afternoon walk was up into the Manphok valley – the valley of ‘10,000 waterfalls’ – so named because of numerous small waterfalls and pools along its route. We started walking, upwards, at the point where the valley connects with the Myohyang River, about 4.5km from the Hyangsan Hotel ( a luxury hotel – where I didn’t stay but wish I had. More on that anon). From here we followed a paved road a short distance to the Sogok Falls (main picture) beside which there is a small gift shop. At this point the trail changed to a steep single file track across rocks and cliff face into which footsteps were cut, and along which wire rope handrails were provided, at more difficult sections. While not an easy walk, with time, it was doable by all, especially as we could walk as far as we liked, returning to the bus when we wished.

The full trek passes the Murung (picture 2), Unson, Yuson, Unjong, Pison and Kuchung Falls but none of our group went beyond Yuson Falls about an hours walk from our starting point. I went as far as Manphok Rock just past Unson Falls (picture 3) and from which I got a nice view of the walkway which spans Yuson Falls (picture 4) in the distance. 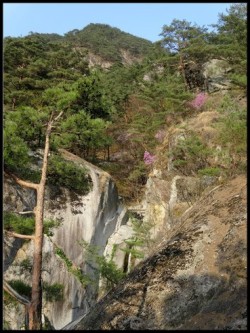 Just prior to the climb to Manphok Rock there is a lovely pavilion (picture 5) affording great views in all directions – also a nice spot for a rest and close to the Pal pools where fairies are known to have frolicked in earlier times. Some of our group stopped here – perhaps in the hope of a frolic with the fairies?

While none of the falls were spectacular in their own right and the water flow was very low, taken as a whole, the valley and walk was beautiful and what a treat it was to be out in nature and away from ‘the Kim story’, if just for a couple of hours. Well, ok, not completely away from it as at the outset we were assured that this beautiful mountain area had been protected and developed at the behest of the Great Leader who has personally planned some of the walking tracks in the area. How grateful we were.

Certainly a great walk and one day hopefully I will be able to return for some extended walking at this beautiful location.

On our short walk we saw no animal life, endangered or otherwise. In terms of plants/flowers I doubt if any of the photos attached depicted the endemic or threatened species but I don’t know. I am far from a botanist and merely admire plants and flowers for their beauty. I trust you enjoy the pictures too. 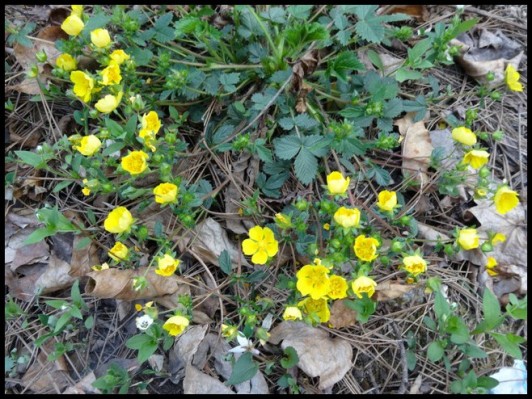 A couple in our group opted out of the uphill walk and were assured that they could have a walk around in the vicinity of the bus. As the bus was parked by the river the obvious thing to do was to walk down the five or so metres and sit by, and enjoy the river. This being North Korea things are not that simple. As this ‘detour’ was not an approved route for foreigners it was not permitted – the river could be adequately viewed from the road! Likewise, a short walk further along the road or back along the road we had used to get here was equally forbidden. So, in reality, the only walk in the vicinity of the bus permitted was up the hill into the valley!

This blog entry is one of a group (loop) of entries based on my trip to Mt Myohyang, North Korea. I suggest you continue with my next entry – Sleeping, Eating and Coffee from Heaven – or to start the loop at the beginning go to my introductory entry – Treasures in the Mountains.

5 thoughts on “Walking on Mt Myohyang”