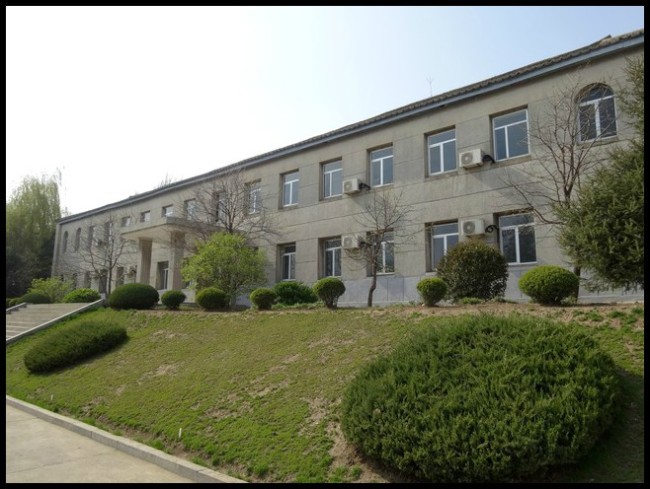 Those who have read others of my North Korea entries will be aware of what North Korea thinks of the United States. Since 1866 when the US warship, the General Sherman, was destroyed and all its crew killed after it sailed up the Taedong River seeking to engage in trade with, and land missionaries in, the country against the expressed wishes of the Korean Imperial Court, the United States has been seen as the very devil incarnate. The US continues to be held responsible for everything negative in North Korea. Every opportunity to demean, belittle, humiliate and insult the US is availed of.

This rather bland looking building (main picture) in the small township of Sinchon, between Kaesong and Nampo, is home to the Sinchon Museum of American War Atrocities. The museum, opened in 1958, covers all alleged American war atrocities against the Korean people since 1866 but it is primarily focused on remembering those committed in Sinchon in 1950 (during the Korean War).

Readers who have been to what is now called the War Remnants Museum (formally the Museum of American War Crimes) in Ho Chi Minh City (Saigon), Vietnam will see some similarities here. While the worst images in Saigon (mild in themselves compared to what is on display here) are now covered from the view of more sensitive visitors no such sensitivities are catered for here. This museum is a no holds barred, non apologetic portrayal of US atrocities in Sinchon where 35,000 citizens were allegedly slaughtered by the US in the 52 days between 17 October and 7 December 1950.

None of the signage is in English, but most of the exhibits really do not need interpretation. That said, a guide (some of them local Korean War survivors) accompanies visitors through each of the 15-20 small rooms and the external exhibits explaining in unambiguous language and explicit detail the US atrocities against the Korean people.

A 2008 Korean Central News Agency article sums up, in a few sentences, what our guide relayed to us in great detail.

“On display at the museum are evidences proving the bestial, vicious and cruel nature of the atrocities committed by the U.S. imperialists and class enemy in Sinchon County…………… and materials about the heroic struggle of the patriotic people. …………during the {Korean}war the U.S. imperialists massacred at least 35,000 patriots and innocent people or a quarter of the population of the county by the most brutal methods. They tortured civilians in a savage manner, buried them alive, hung and burned them to death and drove nails into their heads.”

While I like to portray sights (through pictures) exactly as I saw them I cannot do so here. A very large percentage of the pictures, artwork and other items on display are so gruesome that I could not post pictures here. Those interested can Google – ‘Sinchon Massacre images’.

There is no argument that large scale atrocities took place here and that some portion of these were carried out by US personnel. Both sides frequently violated the Geneva Convention. Outside sources hold that a portion of the atrocities were carried out by local rival factions and vigilantes and subsequently blamed on the US. Irrespective, and accepting that at least some dastardly deeds were committed by the US, the content of this museum and the verbal commentary provided go well beyond what is necessary to get the desired message across.

Picture one (above) – The main museum building. 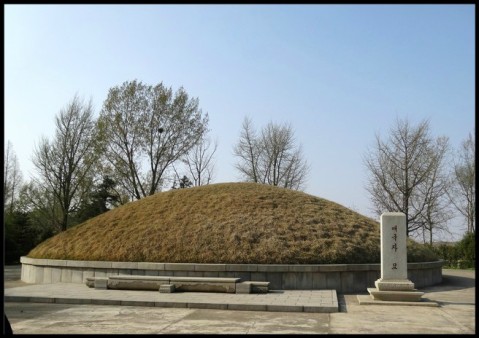 Picture three – Over 900 people perished in this air-raid shelter when US soldiers allegedly poured petrol (gasoline) into the ventilation hole and ignited it. Other individually significant alleged atrocities (in addition to the Sokdong Bridge one depicted below) include 1,000 women thrown into the Sowon Reservoir, 600 thrown into in the Pogu Reservoir and 1,200 people forced into an icehouse and burned to death. 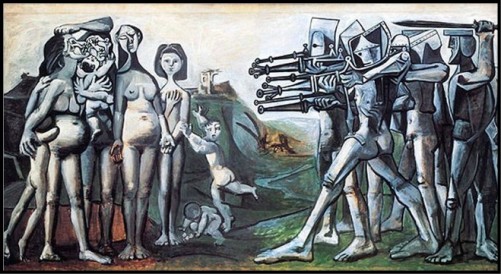 Picture four– one of two large anti US murals on display outside the museum, one on either side of the main museum building.

Picture five – I came across this picture when I was researching for this review. It is a 1951 painting by Pablo Picasso entitled ‘Massacre in Korea’. The picture  (which reminded me of one of Picasso’s other political paintings represented in Londonderry/Derry, UK)  depicts, in true Picasso style, the 1950 Sinchon Massacre. It is seen as the artists direct criticism of American intervention in the Korean War. The original work can be seen in the Musee National Picasso in Paris.

While the museum contains roomfuls of tortuous black and white photographs and items belonging to the victims of, and aggressors in, the Sinchon Massacre (see below) first hand evidence was not available for various events and messages which the museum’s curators wished to cover. 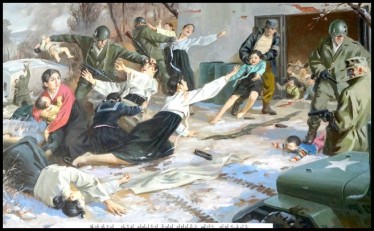 These events and messages are covered via graphic ‘historic’ paintings, some of the less graphic of which I have attached here. A common feature in these paintings is the depiction of US military officers smiling, laughing and taking photographs while they commit the heinous acts they are accused of committing.

The picture below is actually from a diorama rather than a painting. The diorama recalls a specific incident when 2000 people were allegedly pushed to their deaths of the Sokdang Bridge in 1950.

As intimated above, the majority of exhibits in the museum are actual black and white photos of atrocities. The vast majority of these are extremely gruesome and certainly not for the faint hearted. Immediately below are pictures of two of the most mild photos on display, the more gruesome ones having been taken as/when the victims were killed. Again those interested in exploring further should Google – ‘Sinchon Massacre images’.

Intermingled with the photographs are various belongings of the deceased and guns and instruments of torture captured from the aggressors.

In addition to covering the actual atrocities, a section of the museum is devoted to the popular resistance to the killings. This section includes photos of the People’s Guerrillas (many of whom the US allegedly had assassinated), mass leaflets and newspaper articles.

How do I sum up this place?

While I found this museum very disturbing I was able to grin and bear it as I have sufficient knowledge and opportunity to put it into perspective. I know (or can ascertain) the other side of events, not portrayed here. Sadly, for North Koreans who visit the museum what they see and hear here is all they will see and hear on this subject.

Awful though it is, I am glad I got to visit this museum, by far and away the most confronting stop on our tour, as it has added to my understanding of how the party faithful think and, to some degree, why they think as they do.

This blog entry is one of a group (loop) of entries based on my trip to Nampo, North Korea. I suggest you continue with my next entry – West Sea Barrage and Museum – or to start the loop at the beginning go to my introductory entry – Nampo – North Korea’s Industrial Region.