This National Trust property was the home of the Cole (Earl of Enniskillen) family from the early 1700s to 1973.

The Cole family, originally William Cole, arrived in County Fermanagh from Devon, England, in around 1612 when he was awarded the island of Enniskillen as part of the Plantation of Ulster. William Cole renovated and extended Enniskillen Castle, formerly owned by the Maguire Clan, and this became the original family residence. The castle was severely damaged in a fire in 1710, at which point the Coles moved to Portora, another Plantation castle on the outskirts of Enniskillen.

Florence Court is romantically named after the wife of Sir John Cole who first built a house on the site in the early 18th century – at which stage the Coles moved here from Portora Castle. The present Palladian style house was probably built by his son John – around 1760 or slightly earlier.

The Rococco decorated House (though not its furniture) was donated to the National Trust in 1953 and opened to the public the following year – though it was partially occupied by Cole family members until 1973. Andrew John Galbraith Cole the current and 7th Earl of Enniskillen lives on an estate in Kenya.

Within a year, in 1954, a disastrous fire ripped though the house causing significant damage to the upper floors though, though quick thinking and action by tradesmen, the richly decorated ceiling in the dining room was saved. The house what painstakingly restored and in the 1990’s the Cole family restored much of the original furniture to the House including many very personal artefacts. Other furniture which had been sold by the family in the intervening years was bought back by the National Trust and returned to Florence Court. I especially enjoyed the library, which unlike that of many stately houses actually gives you the feel that it was and could be used on a daily basis. Having so much of the original furniture and personal artefacts in the house make it feel as if it is actually lived in – even as you visit.

Internal visits of the house are by (informative) guided tour only, which place significant emphasis on the classic “upstairs downstairs” intrigue and nature of the house as you move through the Cole’s family rooms before going downstairs to the very extensive servants quarters, kitchen and various storage areas – not least the rather large wine cellar – alas, empty. You will walk through a service tunnel under the front of the house – one couldn’t have “the help” scuttling across the front of the house and spoiling his Lordship’s or the Lady’s view.

The House with Wings 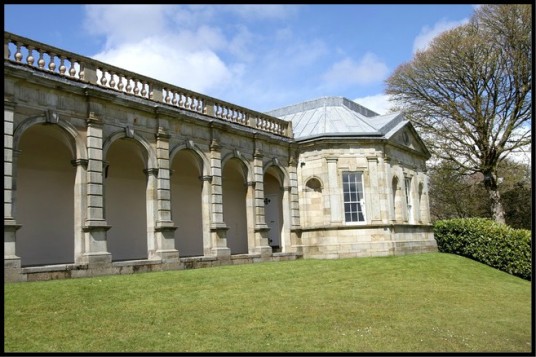 Room for the Colonel

While two apartment type units (for visiting relatives like the Colonel – visit for more info!) are located at either side of the house the actual house is the rather modest (modest in terms of stately houses) “square box” in the centre. The colonnaded wings on either side are just covered walkways added in the 1770s purely for aesthetic purposes and to make the house look bigger and more stately than it really was. They serve their intended purpose well.

There is a quite reasonable “Stables” café/tearoom in one of the outhouses which also serves as the reception area and ticket office, though as I recall I bought my house tour ticket at the main entrance gate as I entered the estate and paid the ground entrance fee. The café here is a better option for lunch if you are making your visit to Florence Court and the Marble Arch Caves a day trip as I suggest you do – though if you have the time each can occupy more than half a day, especially if you have a liking for walking.

Florence Court House is set in beautiful parkland, woodland and gardens (the Pleasure Grounds) with stunning views across to Benaughlin and Cuilagh Mountains. Take a seat in the (Pacific Island inspired?) Summer House and admire the mountain view as well as the garden itself (pictured above).

The estate includes a walled garden (replete with Rose Cottage – pictured above – that can be rented out) with displays of both temperate and semi-tropical plants, a working water-powered sawmill, an ice house and a natural spring well.

As you stand on the steps of the house and look out across a very beautiful lawn you may wonder why the cows you see grazing a little further out do now come onto the lawn. Walk out to the edge of the lawn and you will see why. 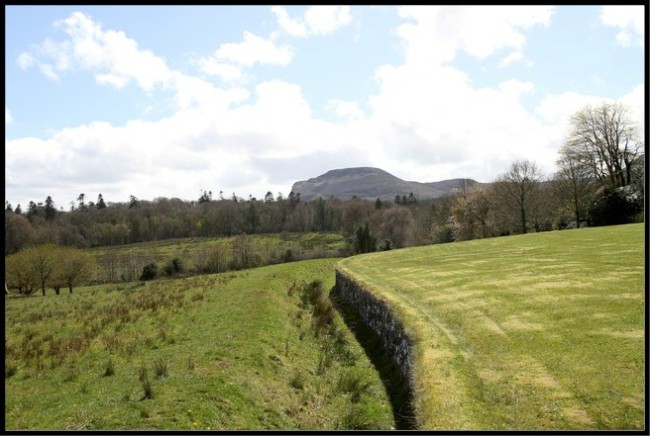 Rather than build a wall across the front of the house and spoil the view – the ground was raised or lowered as required at the edge of the desired lawn area such that a trench and hidden wall (a haha) was created – sufficient to restrain the animals and preserve an uninterrupted vista. 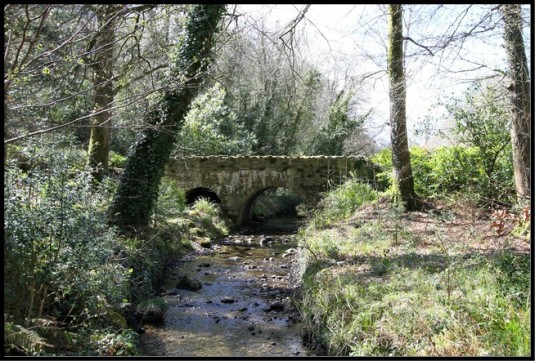 To the south east of the house (easy signposted walk – the Yew Tree trail) and just outside the estate you can see the Florence Court Yew, the “parent” of all Irish yew trees – first discovered here in around 1760. It is believed that almost all the Irish Yew specimens common in churchyards throughout the world come from this one tree as indeed are the yews in the gardens within the estate.

Lots of nice walks can be done around the 220 acre property and further afield. During summer bicycles can be hired (not necessary for the estate itself) by those keen to explore a little further away. The Kingfisher Trail (NCN91) passes by. While I didn’t ride (I was there pre-summer) I think this would be a great thing to do for a few hours – lovely scenery in these parts.

Opening times vary significantly throughout the year and various entrance fee combinations are in place. Accordingly please check website for up to date details.

Photography inside the house is forbidden.

Entrance Fee:
Note that entry to the House and Gardens require separate tickets. See website for up to date details on costs

By Car: The House is well signposted and located on the outskirts of the village of Florencecourt, which was named after the House. It is 8 miles south-west of Enniskillen via A4 Sligo road and A32 Swanlinbar road, 4 miles from Marble Arch Caves.

This blog entry is one of a group (loop) of entries based on many trips to Enniskillen. I suggest you continue with my next entry – Marble Arch Caves – or to start the loop at the beginning go to my introductory entry – “Fare thee well Enniskillen, ………..”