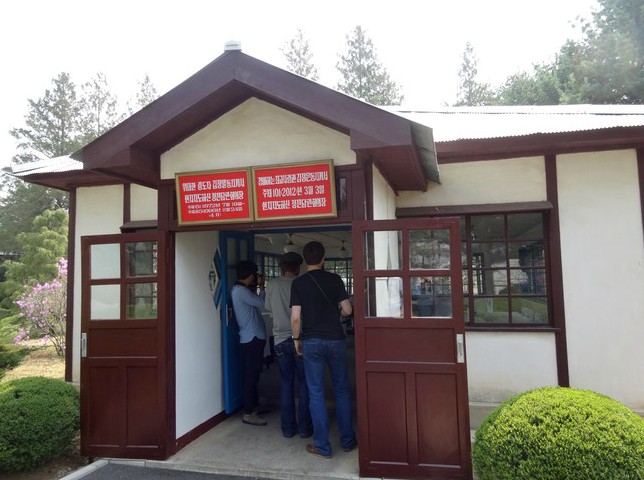 This was our first stop within the Demilitarised Zone.

The Korean War started on 25 June 1950 with the North’s invasion of South Korea (denied by the North which claims the South started the war). Three years later on 27 July 1953 the hostilities came to an end when an armistice agreement was signed. By this stage nearly 3 million people had lost their life in the war. The majority of the dead were, not surprisingly, Koreans – North and South. Nearly 50,000 Americans died as a result of the war.

Notwithstanding the tragic loss of life, the Korean War became the forgotten war of the 20th century, particularly so when it was eclipsed by equally tragic (and equally pointless) events in Indochina within a few short years.

Preliminary armistice negotiations had actually commenced in December 1950 between the United States and North Korea. South Korea, at the time, was against peace talks wanting instead to advance to the Yalu River (the Chinese border) and establish a unified Korea.

The South Korean position had changed by 1951 by which stage a stalemate seemed inevitable and formal talks began on 10 July 1951 with primary negotiators General Nam Il representing China and North Korea and Vice Admiral Charles Turner Joy, an American, representing the South, or more correctly the United Nations Command, an amalgam of countries with around a million troops in Korea ( well over 90% of which was from South Korea and the United States).

Armistice negotiations took place in this especially constructed building – the Armistice Talks Hall – at the edge of the then village of Panmunjom. The actual village of Panmunjom was destroyed in the war and not rebuilt. The Hall is located about 1km into the Demilitarised Zone and 1 km from the Border with South Korea.

The building, as you can see from the attached images, is small and basically holds a table and ten chairs for the negotiators (supposedly originals from the early 1950s) and some seating for officials.

Having completed negotiations and agreed on an armistice document both sides agreed (a rare occurrence) that the Armistice Talks Hall was to small for the signing ceremony. What each side had in mind in terms of where the agreement should be signed differed, of course.

This blog entry is one of a group (loop) of entries based on my visit to Panmunjom (DMZ), North Korea. I suggest you continue with my next entry – Armistice Agreement Signing Hall – Peace Museum – or to start this loop at the beginning go to my introductory entry – If war resumes leave the area as soon as possible!