In 2009, to display a parade marking the 60th anniversary of the founding of the People’s Republic of China on 1 October 1949, authorities erected two 40 metres long by 5 metres high, extremely high resolution LED display screens smack bang in the centre of Tiananmen Square – one some metres on either side of the north south axis – an historically important and symbolic line running down the centre of the square and beyond, through the Forbidden City to the North and the Temple of Heaven Complex to the south.

No problem with that whatsoever. The sad thing is that one of the screens is still there and for me is an eyesore and totally out of keeping with the rest of the square and the surrounding area. Its flashing light is also an ugly distraction after dark, though it does not run all night.

The screen is used to broadcast videos of the city’s scenic and cultural spots and tourist related videos on other parts of China. Commercial advertising is not shown on the screen.

The only value I see for the screen is that it is useful for hiding police buses and other service vehicles behind though that hardly justifies the reported US$2.5m annual running/maintenance costs for the screen. 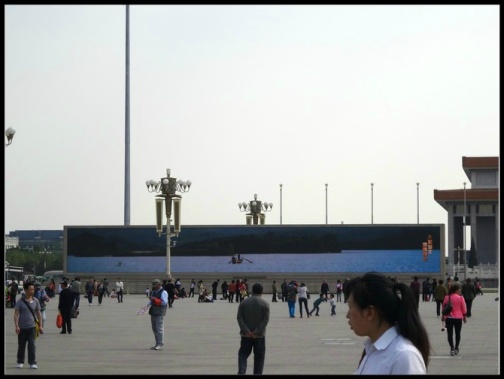 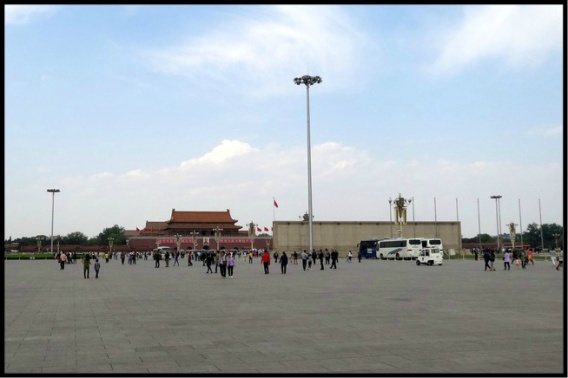 Lest you find my report too negative, I should point out that I do find the row of fire extinguishers sitting in front of the screen rather cute!

Now for a digression and a rant if I may?

The screen received totally unwarranted worldwide attention on 17 January 2014 thanks to the scurrilous and gutter reporting of the UK’s Daily Mail. 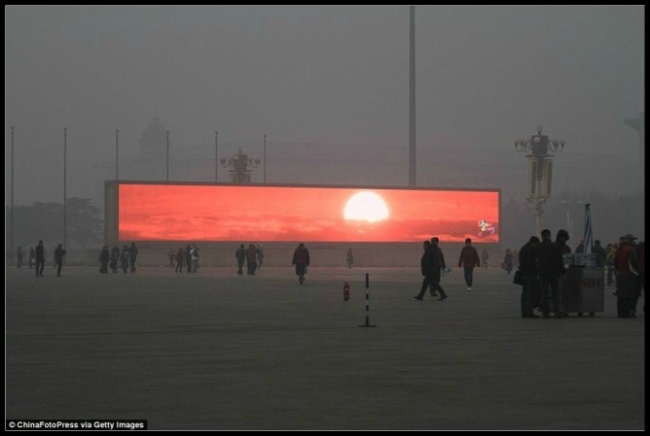 At the time air pollution in the city had been especially bad, but the Daily Mail, not letting facts get in the way, stooped to new lows by publishing the picture just above (credit to ChinaFotoPress via Getty Images), along with the following commentary:

“The smog has become so thick in Beijing that the city’s natural light-starved masses have begun flocking to huge digital commercial television screens across the city to observe virtual sunrises. The futuristic screens installed in the Chinese capital usually advertise tourist destinations, but as the season’s first wave of extremely dangerous smog hit residents donned air masks and left their homes to watch the only place where the sun would hail over the horizon that morning.”

The sad thing is that the report went viral and otherwise quality press including Time, CBS and the Huffington Post picked it up and also ran it.

The truth is that the sunrise shot was taken from a less than 10 seconds segment of a tourist advertisement for China’s Shandong province which, at the time, was showing every day throughout the day irrespective of the level of pollution.

Had it been reported as a joke or a jibe at China I would have found it hilarious.

Interestingly, the photo was not taken by the Daily Mail but is rather credited to ChinaFotoPress via Getty Images, the picture on the screen is clearly marked in the bottom right with a Shandong Tourism logo.  Also the article’s writer was based in New York. Need I say more? (Feb 2017 note – ‘Fake News’ before ‘Fake News’ was invented!)

”Correction: The original post did not mention that the large screens in Beijing’s Tiananmen Square broadcast panoramic scenes on a daily basis, regardless of atmospheric conditions, nor did it state that the sunrise was part of a tourism commercial.”

Dear Reader please be assured that I absolutely accept that China’s dangerous smog is a serious health and environmental danger but sensationalist reporting such as that of the Daily Mail adds nothing to reasoned discussion or the alleviation of the well documented and accepted problem.

This blog entry is one of a group (loop) of entries based on a number of trips to Beijing.  I suggest you continue with my next entry – Monument to the People’s Heroes – or to start the loop at the beginning go to my Beijing Introduction.