Sandy Bay is the name of a relatively large district on the opposite side of the Island to Jamestown, the capital. However, when tourists refer to Sandy Bay they inevitably mean the small bay and beach area in the centre of a long extinct volcanic crater.

Don’t get too excited as, while there is indeed a bay and beach here, the sand is black sand/pebbles, it is unsafe to swim in the sea due to extreme undertows, and the beach (the islands only one) is rather unkempt though ok. Each year a few turtles manage to breed on the beach. If you want to see breeding green turtles, as I recommend you should, go to Ascension Island – a mere 1125kms north which is nothing really if you have managed to make it this far!

The best thing about Sandy Bay Beach is getting there and the view back inland when you are there – a decidedly volcanic landscape though relatively luscious in growth when compared to the natural bleakness of Ascension Island.

The beach is located at the bottom of a very steep (and I mean very steep) drive down from the St Paul’s area through volcanic mountainous desert landscape – the most spectacular scenery on the island and not to be missed. Keep an eye out for the rather cute Baptist Church and the odd abandoned cottage as you head down to the beach. 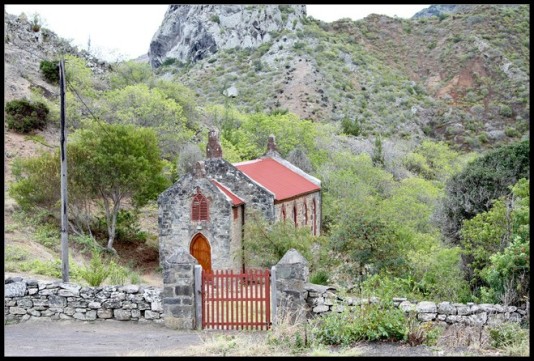 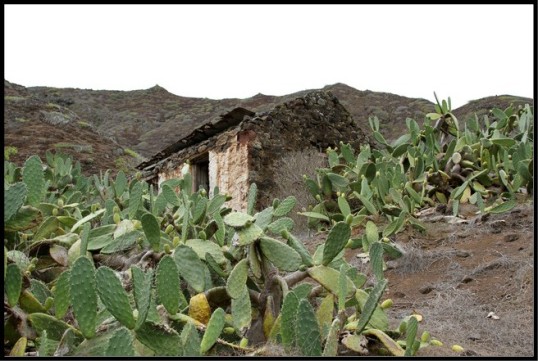 You do in fact drive down the inside lip of a long extinct volcano the other side of which has been lost in the sea. Just make sure there are good brakes on your hire car.

While time did not permit me to do any walking, the beach is the starting point for what looks like some great walks including that of Lot’s Wife’s Ponds – one of the harder island walks. Coming down to the beach you can see, to your right, the towering 700ft high basalt pillar known as “Lot” – and high on a hill to the east is another basalt rock called “Lots Wife”.

As the beach was (and remains) one of the few natural landing spots on the island you will notice the remains of various fortifications and lots of old rusted cannons here – originally constructed to fend of any attempts to rescue Napoleon from his island exile. See my separate Napoleon reviews .

Reputedly, Napoleon’s last trip on the island was a viewing of the sea at Sandy Bay from the upper reaches of the bay on October 4th 1820 where he and his aides, Montholon and Bertrand, sipped champagne and dined with William Doveton (resident magistrate) and his family, one of who later commented on Napoleon’s physical appearance – “he was as fat as a Chinese pig”. Apparently later in the day he had some trouble mounting his horse – as would any inebriated Chinese pig, I imagine!

Not to be outdone when it came to trading insults, Fanny Bertrand, who hated the island, is reputed to have said: “The devil shat this rock when he passed from one world to the next”.

Just go down for a drive and indeed pack yourself a picnic to enjoy while here. There are basic toilet facilities on the beach.

Warning – given road conditions allow yourself three hours for a round trip from Jamestown – if planning any walks, longer.

This blog entry is one of a group (loop) of entries on my trip to St Helena.  I suggest you continue with my next entry – The Consulate Hotel: “Varied Lunch Menu” – or to start the loop at the beginning go to my  St Helena Introduction entry.