A Most “Uncastle” looking Castle

The Castle, which actually bears no resemblance to what one imagines a castle to be at all, is as it always has been, the main government building on St Helena. The building includes the Governor’s office (if you want to send him a letter pop it in the special post box), Council Chambers, the Island’s archives, the police station, court buildings, a library and other offices.

While first built in 1659 as a fort, the oldest part of the Castle still existing dates from a 1708 replacement though the majority of what you see today was built in the 1860s, the earlier building having succumbed to termite infection from termites brought to the Island in a captured Brazilian slaving ship. For further details of this have a look at my review on Jamestown Market. When I visited part of the building was propped up with scaffolding – probably more related to British funding cut-backs then termites this time, I imagine. 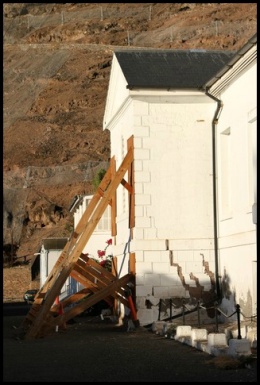 The Castle was originally part of the British East India Company fortifications of Jamestown after St Helena came under the control of the British through the Company under a Charter granted by Oliver Cromwell in 1659. The Castle was also originally the residence of the Company Governor and remained so until Plantation House was built in 1792 and shortly afterwards became the official residence of the Company Governor and later the Governor in 1834.

While a bit of a mish-mash of buildings it’s worth a stroll around and, though closed when I was there, the Archives building is open to the public and contains church records dating back to 1680 and Government records from 1853.

Don’t forget to pop into the beautiful Castle Gardens adjacent to the Castle at some point in your visit to Jamestown.