Our guide assured us that Kim Il-sung was born here, into a patriotic and revolutionary family of several generations standing, on 15 April 1912 and that it was from here, at the tender age of 13, that he set out on the road of revolutionary struggle for Korea’s liberation from Japan. Once he left Mangyongdae in 1925 he didn’t return to Pyongyang until “he” had liberated Korea in Oct 1945.

Outside North Korea, while it is accepted that Kim Il-sung was born in the Pyongyang area it is questioned as to whether or not he was born at this location or in this house.

While one has to make some allowance for the preservation work, paths, etc to make a peasants humble abode accessible to large numbers of pilgrims and tourists and at the same time protect it, I really can’t help wondering if this house is the real birthplace of Kim Il-sung or not. Looking at the abode, and do forgive me if you feel my comment a little sacrilegious, I can’t help thinking that if three wise men and some shepherds were added this would make a perfect double for a Bethlehem stable of 2000 years ago. Given the cult of personality surrounding Kim Il-sung his devoted followers would have no problem with a direct comparison to Christ.

The house, with its low thatched roof, mud walls, simple farm implements, loom, straw mats and storage jars is presented as typical of that of the impoverished under Japanese occupation. One interesting exhibit is a water jar (picture 3) that was purchased by Kim Il-sung’s mother. It is said to show her frugality and lack of money because although it was misshapen, it could still hold water. 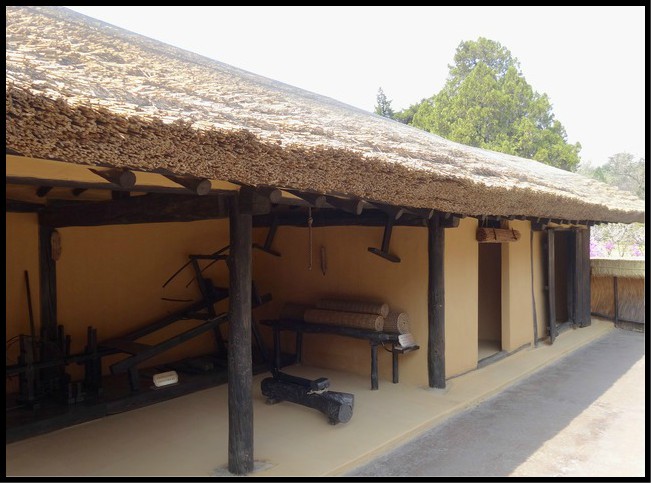 Being the very ‘cradle of the revolution’ and birthplace of the Eternal President, the house is a place of pilgrimage for North Koreans and it was especially busy, and its entrance adorned with more and larger bouquets of flowers than it would normally be, as we visited on the occasion of the Great Leader’s 102nd birthday celebrations.

The house is located in a beautiful manicured parkland setting but such is the problem of organised tours that, we didn’t have time to explore the park and see the Leaders ‘wrestling site’, ‘swinging site’ or ‘warship rock’. I did however get to see a well and partake of the water that gave sustenance to the young Kim Il-sung 100 years ago. Visitors who drink the water would, our guide assured us, become “a great person, like President Kim Il-Sung”.

On our short walk back to the bus we passed what I think is one of the nicest mosaics we came across, depicting the young Kim Il-sung heading of to save his country from the Japanese occupiers in 1925.

This blog entry is one of a group (loop) of entries on my trip to Pyongyang.  I suggest you continue with my next entry – People’s Army Martyrs’ Cemetery – or to start the loop at the beginning go to –  Pyongyang – A Capital City Unlike any Other