Kim Il-sung died in 1994 but the North Korean Constitution states that he is and will remain forever the president of the DPRK. My review – Eternal Life for the Eternal President – covers Yeong Saeng ( Eternal Life) monuments throughout North Korea. These monuments, all similar, imbue the citizens of North Korea to remember that Kim Il-sung will be with them for ever.

This, the Tower of Immortality built at the entrance of Kumsong Street in 1997, does pretty much the same thing and bears a legend reassuring the people that The Great Leader Comrade Kim Il-sung and the Dear Leader Comrade Kim Jong-il (subsequently added of course) will always be with them. 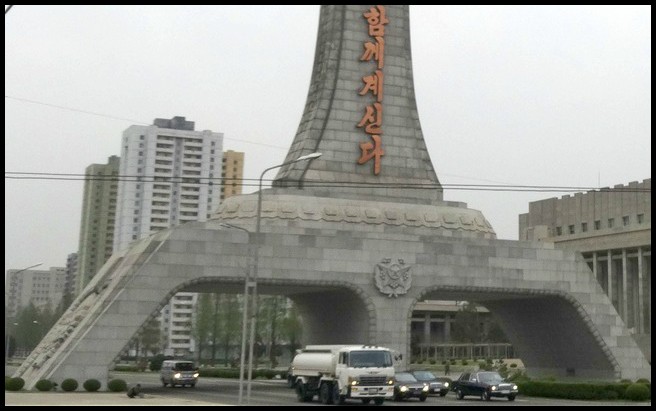 The only real difference between this and the other Eternal Life monuments is sheer size. The Tower of Immortality is some 92 metres tall and stretches across a six lane highway by incorporating two arches to allow traffic to pass through. The flower depicted on the base is the magnolia (national flower of North Korea). 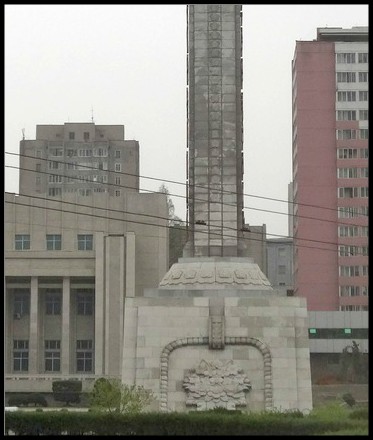 It is fitting that traffic heading from the city centre out to see the embalmed bodies of the Eternal President (Kim Il-sung) and Eternal General Secretary of the Worker’s Party of Korea / the Eternal Chairman of the National Defence Commission of Korea (Kim Jong-il) must pass under/through this tower en route.

I find it very interesting that the DPRK is the only country in the world where the State, the ruling party and the military are headed by people who are dead, giving that term its generally accepted meaning. Just as well the North Korean people have this tower and thousands of Eternal Life monuments to remind them that the Leaders really are still with them, and always will be.

This blog entry is one of a group (loop) of entries on my trip to Pyongyang.  I suggest you continue with my next entry – Kumsusan Palace of the Sun – Meet the Leaders – or to start the loop at the beginning go to –  Pyongyang – A Capital City Unlike any Other

One thought on “Tower of Immortality”